Things of the Past

on the 18th January 2015 at 20:03 - Posted in Police Blog A hot potato of recent months is the use of police cells to incarcerate the mentally ill.

What intuition and foresight the Care Minister Norman Lamb has, to suggest today that the NHS, local authorities and the police, have pledged to stop locking up these mental health patients in police cells.  It's not as if anyone knew that this was a problem before last year, when ACC of Devon and Cornwall Police Paul Netherton tweeted about a 16-year-old being held in custody due to a lack of beds.  Well, not since the matter was reported in 2013, or when it was blogged about in 2012, or just about every year before that for ten years or more. 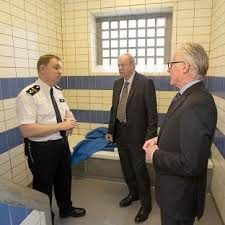 What we'll do, Mr Lamb, is just leave you here for the average time it takes to get the police doctor, followed by two mental health nurses and a psychiatrist, to assess you, then for the time it takes them to find a bed for you.  If you weren't crazy before we started, you will be by the end.
It took the tweet from the ACC to prompt serious attention on this subject despite the fact that Theresa May addressed the Police Federation on this subject in 2013.
I am sure the scores of agencies waiting to take these mentally ill patients off the police's hands, would fill an elevator.  It's not as if the NHS is feeling the effects of cuts on other agencies.  I am sure they won't mind finding a few more beds for depressed drunks who are suicidal for the few hours it takes them to sober up.
Maybe in some areas there is a robust system in place, but in Blandshire there is rarely a day when a mental health patient is not brought into custody.  The minimum wait to get an assessment done is about six hours, and sometimes the Mental Health Team simply refuse to come out, because from the description of the person over the phone, they don't think the person is mentally ill, even though the force doctor thinks they are.
Forgive me if I don't leap for joy that yet another politician is bandying around "pledges" on the subject.
-------------------------------------------------------------------------