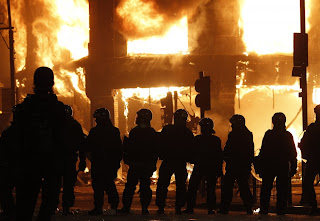 So Mark Duggan, a man in his own Obituary picture shown on national news is posing using what appears to be his fingers shaped like a gun looking like gang signs is pulled over by armed police in a taxi and during an altercation a shoot out takes place resulting in one  officer shot and Duggan fatally wounded.

Memories of The Broadwater Farm riots in 1985 where many of the rioters were not even born or too young to remember were being tossed about by "witnesses" being interviewed on TV.  "This memory is in our DNA where Cynthia Jarrett died after police broke into her home" said one representing the "Youth of Haringey"  "We may have not been there but it's passed down to us"

Cynthia Jarrett dying is in no way even the same as Duggan dying and comparing the two is an insult to Cynthia's memory.

People on tv last night were calling Duggan "Their Brother" and even they said they didn't even know him.

Duggan lived by the sword and by the looks of it, died by it.  He allegedly shot at officers and therefore was shot at in defence and was killed.

There are internet rumours going round that someone who knows someone spoke to someone who saw someone see a 16 year old girl allegedly beaten with sticks by police for no apparent  reason. What angers me more is depending on who you believe is that this was used as a "reason" for a full scale riot in Tottenham last night.

There was a protest about the killing of Duggan and the way the area is policed and this was presented to the doors of the Tottenham police station.  For whatever reason after that, it went down hill from there on.

Then a police car with two officers was hijacked and pushed into the road and set alight. This was then a beacon for others to start violent disorder.

What angers me more through all of this, is the two faced cheek of the government and media.  Suddenly to the government we have their "full support" and "no justification for the aggression shown to the police" with the media it was the complete lack of support and the cutting off of anyone who dared to voice support to the police coming under attack.

The government talk about the "aggression shown to police" but fail to realise the irony of their aggression shown to police with the cut backs to the front line and to the police pensions and pay which are about to take place.  The "thin blue line" is so thinly stretched it's fracturing at points and last night was a case in point.  I think you can expect more of this to come.

What the government and public fail to realise is that Public Order trained officers and others like myself with specialist skills in areas including firearms are all volunteers.  We get no extra money and certainly thanks to Hutton, Windsor and May we won't be getting any more for a few years.

We can just as easily turn our passes in as easy as we got them.  If I don't want to be a Public Order trained officer any more I can turn in my certificate.  Just as easy if I don't want to do CBRN or Search.  I can easily fail to sign up for the next refresher or fail the fitness test.

If this carries on with the front line being savaged by the government and public alike I can see many officers ditching their specialist training.

Why should we face a barrage of petrol bombs and rocks whilst the ones that govern us and take away our rights, pensions and wages are sleeping soundly in their beds?

I can see many officers failing to come in when off duty, the sounds of unanswered ringing phones deafening.  The number of mobiles that suddenly had no signal.

We don't get paid a call out fee, so why should we come in?

We have enough restrictions on our lives as it is without placing me under virtual house arrest in case another riot takes place.

It's about time that the government realised that last night is a taste of things to come.

Mess with our tactics, mess with our numbers, budgets and wages and this is what you get.

A lot of innocent people cleaning up after a night of disorder and many officers injured.

What I will say is that it's going to make the Notting Hill Carnival an interesting two days.