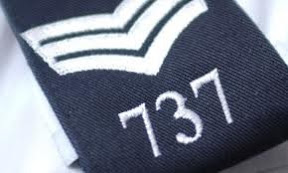 I sometimes wonder why I bother to read some reports about policing published in the main stream media, many are bias towards the government and have a tendency to be rather far from the truth or grossly exaggerated.

Do we go in hard against violent thugs claiming they are for "democracy" as they smash every thing up and then we face hatred in everything we read?

Or do we go in "soft" and then face hatred in everything we read?

However the amount of utter drivel that can be spouted in the media, some of it is brought to our own doorstep and is our own bloody fault!

Once again (unconfirmed) reports are coming through from a variety of sources stating that some officers on duty on Saturday were not wearing numbers....yet again!

Why? It is clearly regulations that officers on duty, in uniform, with the rank of Sergeant and below, must wear numbers and that includes public order kit.

Now, playing devils advocate here, it could be the reports are wrong.

It could be that the officers involved have had their numbers ripped off. A tactic used by protesters in the past to either anger officers, gain a trophy or to purposely cause the officer not to have any numbers on display then they're open to complaint or discipline. Also poor design on the coveralls mean the epaulettes can easily be ripped off.

It maybe that the officer is so sick and tired of malicious complaints that they have taken them off in order to get on with the job.

Or, it could be that the officer does not want to be accountable for their actions and will use the anonymity to get away with unlawful tactics which if thats the case, makes my blood boil.

I wear and have always worn my numbers. I am accountable for my actions and I am not hiding anything.

If the reason for failure to wear the numbers were for sinister reasons only, then I hope you are found out and disciplined.

I cannot figure out why the Supervisors left it to go unchecked. Then again, in all that was going on, it may have been a tad difficult. However these should have been on the kit and checked before deployment.

It angers and disappoints me because it takes the shine off the hard work that was done by the thousands of officers on duty that day who were there for lawful duties, to protect those demonstrating and the property of those on the route.

It angers me because if it means you were in it for the unlawful tactics then you are no better than those that were trashing the area.

We take enough hits being police officers as it is.

We don't need any more being brought to the public eye by officers I thought were supposed to be colleagues and friends!