Guess not everyone loves the Queen eh?

Medals handed to members of the Forces, police and the Royal household have been placed on eBay just days after they were presented by the Queen.

At least 30 of the Queen’s Diamond Jubilee medal have been sold on the internet auction site, with the latest one selling for Â£350.Â

Some are accompanied by comments such as ‘Genuine full-sized medal issued to me’ and ‘Issued this week in a very nice presentation box’. 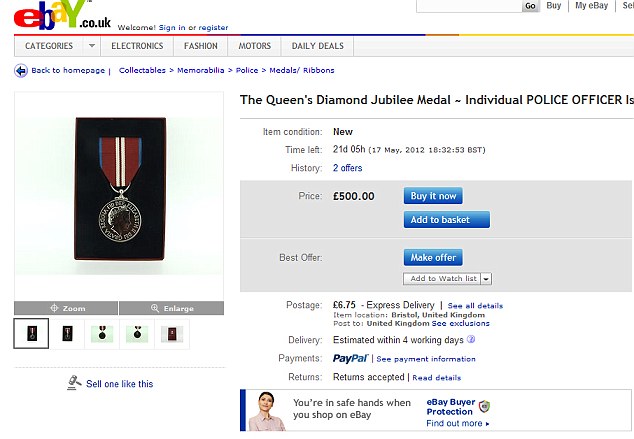 Geoff Ogden, a former Chief Superintendent who once led the CID at Humberside Police, said he was appalled the medal apparently meant so little.

He said: ‘An integral part of being in the police service is having authority under the Crown for the protection of life and property.

‘If you don’t have that pride of working under the Crown, particularly at a time of jubilee like this, then I wonder whether they have got pride in the police service at all.

‘I’m appalled by it and I think 99.9 per cent of officers will be appalled by it. If I was still serving I would use disciplinary procedures to deal with this matter.’

Yes I bet you would Geoff… and that attitude is one of the reasons people hate a lot of what goes on in the job now… Thank fluff you are retired.

Â I think the question that needs to be asked here is…”why are they being sold?”

Well… you can only wear them at ceremonial gigs and since we aren’t issued with dress uniform anymore (because there aren’t any gigs and court security is crap so we need full kit whwn attending…) why not sell the gong and just wear the ribbon?

Or it’s a silent protest against the constant attack on our livelihoods by an uncaring government from a group of people without a voice?

I will be keeping mine… for my boys…

The Department for Culture, Media and Sport said: ‘The Diamond Jubilee medals are issued on behalf of Her Majesty as a mark of thanks to those in key front-line services.

‘It is very disappointing to think that some of those so honoured have decided to take this action.

‘However, as long as the medals in question were legitimately acquired by those trying to sell them, then doing so is not unlawful.’

Not unlawful Geoff… that makes it LAWFUL… so, discipline away-it would do you no good… fucking Ruperts…is it any wonder we have low morale with Herberts like that at ACPO wank?Â