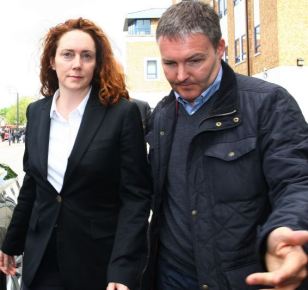 “your cell is over here, ma’am’

The former News International chief executive Rebekah Brooks arrived at Lewisham Police Station today, above, to be charged with four others with perverting the course of justice during the phone-hacking scandal. They were initially arrested after a bag containing a laptop, iPhone and paperwork was found in a bin near their Â£1.5m home. The others are Mrs Brooks’ former PA Cheryl Carter, Head of Security at News International Mark Hanna, News International chauffeur Paul Edwards and security consultant Daryl Jorsling.

‘It’s a fit up!” said Mrs Brooks out side the cop-shop (as she did a couple of really fat coppers that looked scared to be out waddled past) ‘Those barsterd coppers have got it in for me, in for me… they’ve all got it in for me!”

Mrs Brooks who is now expected to either: become mentally ill with the stress or pregnant on the eve of sentencing should she be found guilty, went on to say that she ‘often kept records of secret and incriminating documents stored on her iPhone and iMac computer in a laptop bag in a bin a couple of doors away from their millionare home- I mean, derrr doesn’t everyone?’

A close friend, work colleague and neighbour of Mrs Brooks said, “oh shit… I hope she doesn’t stick the fucking knife into me! I have more to loose than a funny hair cut and odd dress sense-oh fuck really? Err got to go, lawyer lunch err… shit”. He then walked off muttering he was late for a cabinet meeting or something…

‘Fuck all will happen to her anyway’Yes, we all know that. I mean when you have THAT much ‘black’ on people of that wank- you are safer than Mr Safe who is sitting in a giant safe in the middle of Safetown-wrapped in bubble-wrap.

PinocchioÂ revealed to have wooden dick!

While I suspect there is significantly more proability of me becoming the next Space Pope that ‘Can’t spell Rebecca’ Brooks going to jail, it’s fun to think about the possibility-after all the shit she has given out to: Police, Prison Officers etc… to be actually involved in shutting that door…