Every police officer in the country will be armed with a Taser under plans proposed by the Police Federation.

The group, which represents 124,000 rank-and-file officers in England and Wales, has written to the Prime Minister demanding the number of stun guns be trebled so they can be placed in the hands of every frontline officer. 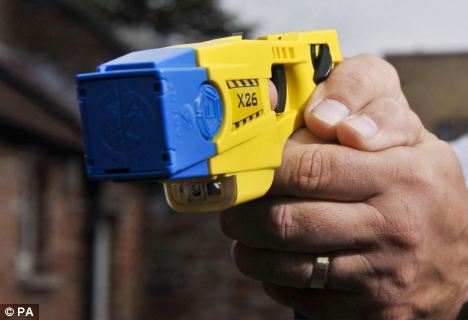 Arming by stealth? The Police Federation calls for every front line officer to be armed with a Taser

It has calculated that 36,000 would be enough, because not all frontline officers are on duty at the same time.

The federation wants the Government to invest Â£111million in more muscular technology, including having water cannon in mainland Britain for the first time and extra riot squad equipment to protect officers and the public.

But after a series of disturbing assaults on theÂ  mentally ill, vulnerable and elderly with the controversial 50,000-volt Tasers, criticsÂ  say the move amounts to â€˜arming by stealthâ€™.

Paul Davis, secretary of the federationâ€™s operational policing sub-committee, says the extra Tasers are essential for the safety of officers and the public.

In the face of cuts to force budgets, fewer police are available to respond to incidents, which means officers are being sent out alone, leaving them vulnerable to attack, he argues.

Mr Davis said: â€˜More first-response officers should be given Tasers. Itâ€™s a less lethal option. Single patrolling will be more prevalent. Officers are more vulnerable in terms of not having the backup of a second officer present. 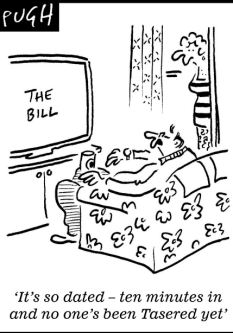 â€˜They need to have the proper equipment to enable them to do their job.â€™Â

When Tasers were introduced in 2004, they were issued to only a select group of highly trained firearms officers. But in recent years, they have been creeping into other units including public-order squads, dog handlers and road traffic.Â

Forces in England and WalesÂ  fired Tasers more than 1,500 times in the year ending March 2011, a 70 per cent increase on the previous year.

Officers are allowed to use the weapon only in circumstances where they â€˜would be facing violence or threats of violence of such severity that they would need to use force to protect the public, themselves and/or the subjectâ€™.Â

But there has been a series of cases which have raised questions about their use.

Last month it emerged that police had Tasered an Alzheimerâ€™s sufferer in his home when he refused to go into care. A police watchdog inquiry is under way into the arrest of a man in London shot four times with live bullets before officers allegedly Tasered him in the groin in February.

Solicitor Sophie Khan, who has represented several people injured by stun guns, said: â€˜This is arming by stealth. Itâ€™s all being rushed through without any public consultation or parliamentary scrutiny, just a letter to the Government saying â€œwe want more Tasersâ€.â€™

Downing Street said: â€˜The Government wants to ensure the police are properly equipped to do their job and protect the public. Tasers can be valuable when officers face violence or threats of violence.â€™ The decision on how many officers could use Tasers was down to individual forces, it added.

We all want to be armed with Tasers say police officers:

Police take over holiday camp for the Games