Armed police and bomb disposal units called to property after reports of man intending to harm himself and others. 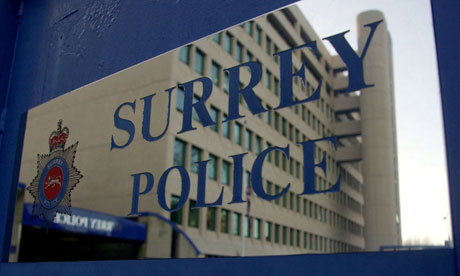 Surrey police said the man shot in Woking had been taken to hospital and another man was in custody.

A man is being treated in hospital after he was shot by police at a property in Surrey.

Armed response units were called to an address in Knaphill, Woking, just after 10pm on Wednesday night following reports that a man was armed and was intending to harm himself and others, Surrey police said.

Bomb disposal experts also attended over concerns that explosives may have been inside the property in Oak Tree Road.

A police cordon was set up and a number of residents were evacuated from their homes.

The man, in his 40s, was later shot at the scene before being taken to St George’s hospital in Tooting, police said. It is not known how serious his injuries are.

Another man, in his 30s, was arrested and remains in police custody.

Officers also recovered a firearm from the scene. It has yet to be examined by experts.

Police said they were not looking for anyone else in connection with the incident and have referred the shooting to the Independent Police Complaints Commission.