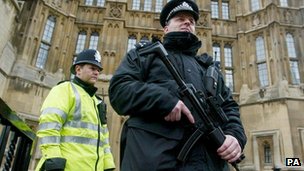 Police officer numbers in England and Wales have fallen to their lowest level in nine years, the Home Office says.

Policing and Criminal Justice Minister Nick Herbert said the reduced numbers were a result of “necessary savings” as part of the deficit reduction programme.

He added that service to the public was “largely being maintained” and projections showed 94% of officers would remain on the front line – and the proportion was rising.

“We inherited a situation where there were some 25,000 officers not on the front line,” he said.

“So there was plenty of scope for forces to make savings while improving performance, as forces are showing as they continue to drive down crime.”

But shadow police minister David Hanson said it was “deeply worrying” that nearly 10,000 officers had already been lost to budget cuts since the last general election.

He told the BBC “boots on the street” were under threat at a time when there were growing challenges for forces to keep crime at “historic levels” following falls over 15 years.

The total number of officers in Derbyshire fell by 202 and Warwickshire had 75 fewer, while Surrey had 89 more – the only force to see an increase.

The largest numerical decrease was in the West Midlands – down 323 officers (4%).