They actually paid somebody to paint â€˜intestinesâ€™ on the road at Boxhill?

The Long (and squiggly) road to Olympic glory: How a 328ft art work was painted with watering cans… by car headlight

The worldâ€™s cyclists converged on the idyllicÂ  setting of Box Hill in Surrey last weekend. As the centre of the Olympic road races, the best cyclists in the world climbed the famous hill on their way back to the finishing line in The Mall in London â€“ nine times for the men, twice for the women.

Did Britainâ€™s Lizzie Armitstead notice anything unusual on the road as she raced towards her silver medal? The person responsible for the unusual apparition on the road, the artist Richard Long, shrugs.

â€˜Cyclists have got better thingsÂ  to do than look at art,â€™ he says modestly.

Bristol-born Long, 67, is one of the best known landscape artists in Britain. He has created unobtrusive interactions between man and the landscape for nearly 50 years.

Inspiration: Richard Long drew on his love of cycling and walking for his Olympic creation in Surrey

This work, a joint commission between the London 2012 Festival and the National Trust, is a road marking 328ft long, completed in bright white road paint. It will form a memorable addition to the Zig Zag Road in this famous chalk landscape for years to come.

The commission, which resulted in the Box Hill Road River, as the artwork is called, was an attractive one for Long. â€˜Itâ€™s quite appropriate to my work, because a lot of it has been to do with roads and road walking.â€™

Long says he connects himself increasingly to the long EnglishÂ  tradition of engagement with the landscape â€“ â€˜I donâ€™t think about that relationship, but with 40 years of hindsight, it seems to be there.â€™

His work began with an intervention that might never have been noticed. As a student in 1967, he took a journey out into the countryside, and in a field walked up and down until a straight-line path was made in the grass.

There are photographs, butÂ  the work of art is the event itself, entitled A Straight Line Made By Walking.

Artists at the time were deliberately making small-scale works that demanded no skill or expense. Long was connected to the international group of Arte Povera, or Poor Art. The materials â€“ the simplest stuffÂ  of water, stone, twigs, estuary mud â€“ made him seem part of that international movement. 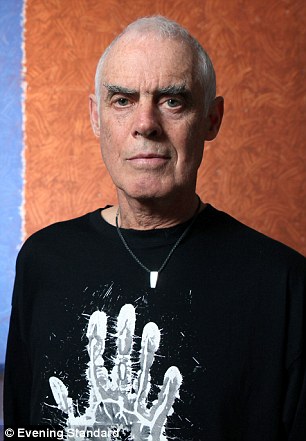 The commission, which resulted in the Box Hill Road River, as the artwork is called, was an attractive one for Long

â€˜Those materials are the basic building blocks of the planet. I didnâ€™t have any desire to work in any other materials. These materials had a primitive aspect, and my work was something like cave painting.â€™

Other artists connected with arte povera used sacks, coal and rags in simple arrangements. There was something about Longâ€™s art, however, that propelled it to popularity amongÂ  gallery-goers.

A good example of his work in galleries is now to be seen in a display entitled Artist Rooms at Hepworth Wakefield, in West Yorkshire.

There are two large circles, filled with stone, one smooth-topped, one rugged; there is a long thick line made from sticks on the floor; and, on the wall, there is a cascading waterfall of white clay, falling from fields where it has been applied, wet, in fistfuls. â€˜I stop short of monuments, ideologically,â€™ Long tells me. â€˜This piece [at Box Hill] is unusual because itâ€™s more ritualised, more permanent than usual.â€™

Also present in his exhibitionsÂ  are records of his engagementÂ  with landscape. In a work of 1998, he walked from the southernmostÂ  to the northernmost point in mainland Britain, placing a stone every day for 33 days during the 1,030-mile walk.

Â He doesnâ€™t criticise his contemporaries, suchÂ  as Antony Gormley or Anish Kapoor, who have transformed landscapes with immense monuments such as the Angel Of The North or the Olympic Orbit tower. But itâ€™s clear that Longâ€™s work has to be sought out by the interested.

â€˜The solitude in going for a long walk is important,â€™ he says. â€˜Sometimes, that solitude is difficult to reconcile with the kind of public recognition that art brings.â€™

He is reputed to have refused the Turner Prize, the first time it was offered to him in 1984, accepting only when he was shortlisted three more times in the next five years.

And though most of his similar contemporaries have remained the object of controversy, Longâ€™s simple work has attracted plenty of popular acclaim.

A 2009 retrospective at Tate Britain pulled in 61,121 visitors â€“ respectable numbers for complex art with a strong conceptual aspect.

What appeals to an audience? In part, itâ€™s the ecstatic response to landscape, and also the way Long has made art out of those very English things: a walk in a country and a cycle ride. He is an imposing figure at 6ft 4in and still an epic walker.Â

â€˜I once walked from Bristol suspension bridge to London Bridge without pausing,â€™ he tells me. â€˜And Iâ€™ve always been a cycling fan, always followed the Tour de France. This piece is inspired, in a way, by the tradition that fans write messages on the road encouraging the cyclists in the Tour.â€™

Is he not concerned, then, about the spread of road and rail? â€˜Itâ€™s still pretty well preserved, the English countryside. I donâ€™t want to change the world. If you do something different as an artist, thatâ€™s not populist but all the same, it makes a difference in the world.â€™

The making of the Box Hill road markings was an unusually tense piece for Long, who likes to work in solitude and unobserved.

â€˜I made it with watering cans. For traffic reasons, I was allowed to work only between 9.30 at night and 5.30 in the morning. For some of the time, I was working between two cars with their headlights switched on full. Today was the first time Iâ€™ve seen it by daylight.â€™

If you go over the road in the next few weeks and see the markings, you might not recognise it as a work of art at all.

But you might recognise something stirring, even poetic about it. Like many before, you might be responding to the art of Richard Long without knowing quite why; and beyond that, allowing him to reawaken in you a response to the English landscape that you might have forgotten you possessed.