Police are failing to investigate crimes committed by ethnic minorities because they fear being branded racist, a report claims.

A pamphlet by think-tank Civitas, released today, says pressure to show racial sensitivity may have been behind the initial failure to properly investigate Asian street grooming gangs in the North of England.

Jon Gower Davies, a former academic, links the failure to police being branded â€˜institutionally racistâ€™ by the Macpherson report into the death of Stephen Lawrence, which he says left police â€˜shackledâ€™ by bureaucracy.

The pamphlet, which is entitledâ€™ Mind-Forgâ€™d Manacles: Murder, Macpherson and the Policeâ€™ finds Macpherson lacked evidence for the charge of institutional racism which he says â€˜lacks substanceâ€™.

This year a gang from Rochdale were jailed for plying teenage girls with alcohol before raping them.

All but one gang member was of an Asian Pakistani background.

The court heard up to 47 vulnerable girls were passed around the group and forced to have sex several times a week, but two years before action was finally taken, police missed an opportunity to stop the gang when a 15-year-old girl told them she had been raped.

A former Labour MP, Ann Cryer, said the police failed to investigate properly because they were â€˜petrifiedâ€™ of being branded racist. 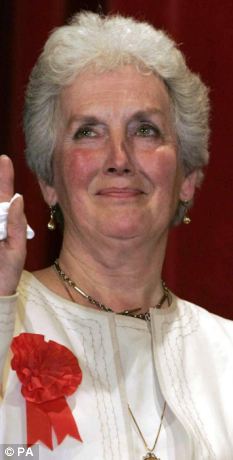 Former MP Ann Cryer, said police failed in their investigation of the Rochdale sex gang because they were too afraid of being branded racist

Mr Davies, a former Labour councillor, describes the lack of investigation into sex crimes as a case of â€˜reverseâ€™ institutional racism in which the views of victims, vulnerable white girls, were not taken seriously.

The report states: â€˜When in February 2012, the trial of a number of Pakistani men finally came to court, it seems that allegations of abuse by one (white) girl had been just ignored by the policeâ€™.

The pamphlet, which is published by the Civitas think tank, concludes Macpherson failed to address genuine weaknesses in police practice at the time.

It states: â€˜Macpherson… not only obviated the need to make a realistic if less flamboyant analysis of the limitations of the policing of the murder of Stephen Lawrence, but also led to an over-anxious police leadership to make a fool of itself by adopting policies which are neither operationally nor socially nor ethically sound and properâ€™.

Following Lord Macphersonâ€™s use of the phrase, it became a central tenet of discrimination rules in Whitehall and among police and politicians.

In 2009, on the tenth anniversary of the Macpherson report, Trevor Phillips, the head of the countryâ€™s equalities watchdog said he had abandoned the phrase.

Stephen Lawrence died in an unprovoked attack while waiting for a bus in Eltham, South East London.

In January of this year Gary Dobson and David Norris were convicted of Stephenâ€™s murder.