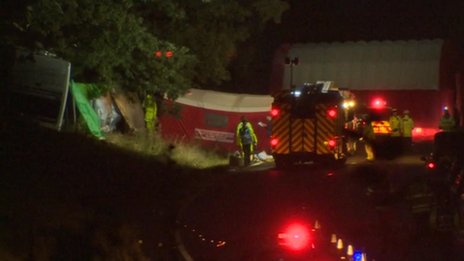 Three people were killed and a number of others seriously injured when a coach returning from a festival on the Isle of Wight overturned after crashing into a tree near a tunnel in Surrey.

The 51-seat coach was going north on the A3 when the crash happened near the Hindhead Tunnel at 23:50 BST on Monday.

The coach from Merseyside left the carriageway between the tunnel and the Thursley exit and hit a tree.

Injured passengers have been taken to a number of different hospitals.

Three people were declared dead at the scene.

No other vehicles are thought to have been involved in the crash.

“I understand the road was dry. We cannot see any reason that the road conditions would have had any effect on what occurred,” he said. 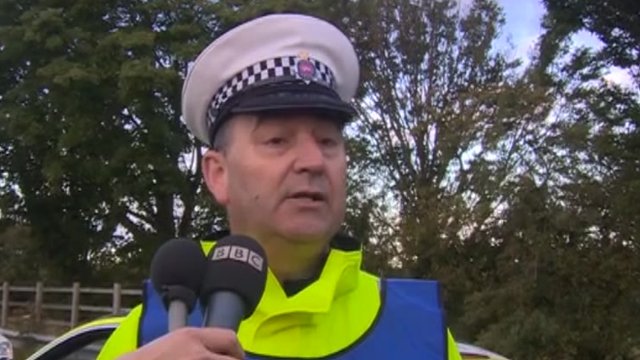 Inspector Richard Mallett: “It was a significant impact” (video here)

The force said the crash had been declared a major incident.

The road was closed in both directions and Surrey Police, Surrey Fire and Rescue and South East Coast Ambulance Service attended the scene, along with crash investigators.

Dave Hannel, owner of Merseypride Travel, said the coach left Aintree on Wednesday to travel to Bestival on the Isle of Wight.

He told BBC Radio Merseyside he would like to send his condolences to the families of the people involved in the crash.

Surrey police are working with the Merseyside force, as well as with the coach company, to identify the passengers and notify relatives.

Other passengers have been taken to a rest centre which has been set up nearby by Waverley Council.

Surrey Police Assistant Chief Constable Jerry Kirkby said: “This has been declared a major incident and we are working with our colleagues from the other emergency services and other partner agencies to provide a co-ordinated response in line with agreed protocols. 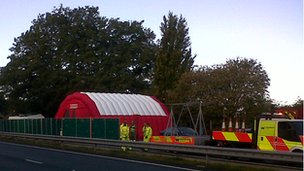 The A3 near Hindhead is expected to be closed for several hours.

“Our thoughts remain with the relatives of the dead and the injured at this time and we are working very hard to notify their next of kin.”

A spokeswoman for Surrey Police said officers were currently carrying out a “thorough search of the scene including the coach and the surrounding area”.

The road is expected to remain closed for several hours and diversions are in place.

A casulty helpline has been set up by Surrey Police for anyone concerned about people travelling on the coach on 0800 056 0154.

More than 50,000 people attended Bestival which was held between 6-9 September at the Robin Hill Country Park on the Isle of Wight.