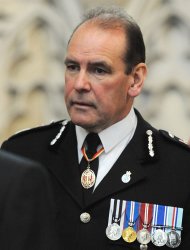 Sir Norman Bettison, who is to retire as Chief Constable of West Yorkshire PoliceÂ â€¦

The families of Hillsborough victims have welcomed the resignation of a top police officer who criticised Liverpool fans in the wake of the tragedy.

Sir Norman Bettison, then a South Yorkshire Police chief inspector, sparked fury in 1989 when he said supporters made policing “harder than it needed to be”.

Now the Chief Constable of West Yorkshire Police, he announced he will step down in March next year amid an investigation by the police watchdog.

Margaret Aspinall, chairwoman of the Hillsborough Families Support Group, said: “Obviously I’m very, very pleased. I’m absolutely delighted that he’s going. But then he’ll be going on his full pension, and I’d like to know the full reasons why he’s choosing to retire as soon as this.”

A complaint was made to the Independent Police Complaints Commission (IPCC) that Sir Norman – who was off duty on April 15 1989 and went to the match in Sheffield as a spectator – had supplied misleading information after the disaster.

The IPCC also said there was a second element to the referral, which related to a statement the officer made last month following the report of the Hillsborough Independent Panel.

Mrs Aspinall, whose 18-year-old son James died in the tragedy, said: “Why didn’t he stay, then, until the IPCC came out with their investigation? But he’s decided to leave. I’m not arguing against it, because I’m thrilled that he is going, but if he’s got nothing to hide, why is he retiring? The man has got something to worry about.”

There were calls for Sir Norman to resign after his comments about the behaviour of Liverpool fans in 1989, but he responded with an apology and said his role was never to “besmirch” the fans and added that the Liverpool supporters were in no way to blame for the disaster.

Later, he was involved in an internal inquiry held by the force in the aftermath of the tragedy. He has denied any wrongdoing in relation to the disaster.

In a message posted on the West Yorkshire Police website, Sir Norman said he hoped his departure would assist the IPCC in its inquiry. “I hope it will enable the Independent Police Complaints Commission to fully investigate allegations that have been raised about my integrity. They need to be fairly and fully investigated and I welcome this independent and formal scrutiny,” he said.

And: Hillsborough tragedy: Norman Bettison to retire after controversy over role

‘Bettison’s decision to retire is understood to have caused dismay among some senior officers, who feel political support was withdrawn from him, forcing him to go.’