Victims of antisocial behaviour to decide on punishment 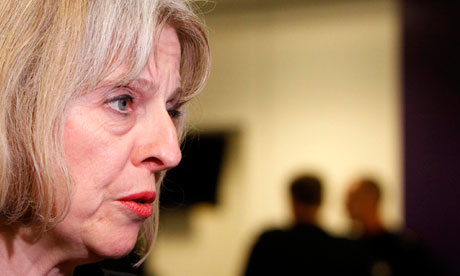 Theresa May is to set up a review of how the Human Rights Act can be replaced by a UK bill of rights and responsibilities.

Victims of antisocial behaviour are to decide how offenders are punished for the first time under a ‘community remedy’ power to be detailed by the home secretary,Â Theresa May, in a speech at the Conservative party conference on Tuesday.

The home secretary will say she wants to change the law to empower victims to ensure they get some form of reparation by choosing from a ‘menu’ of punishment options that would include a form of restorative justice.

May is also to respond to the delays of up to 14 years in extraditing terror suspects such as Abu Hamza by announcing she is setting up her own review of how the Human Rights Act can be replaced by a British bill of rights and responsibilities. This is likely to clash with the coalition government’s existing commission on a bill of rights that is not expected to recommend scrapping the Human Rights Act.

The home secretary is also expected to confirm she intends to opt out of areas of EU police and justice co-operation, including possibly the European arrest warrant under which teacher James Forrest was detained in France last month after leaving Britain with his pupil Megan Stammers.

May will also confirm her target of cutting net migration from 210,000 to ‘tens of thousands’ by the time of the next election. She also hopes the ‘community remedy’ will help boost the introduction of police and crime commissioners when the first elections take place on 15 November.

The home secretary told the Daily Mail the new power would be used for low-level crime such as criminal damage, which would normally be dealt with by a caution. Last year, 272,000 cautions were handed out for such antisocial behaviour. The new police and crime commissioners will decide on what menu of punishments should be available to victims to choose from.

An offender who refuses to accept the punishment would face court proceedings as an alternative.

“One of the big problems for the victims of antisocial behaviour is that they feel powerless,” May told the newspaper. “Somebody does something to them or their property and they feel they don’t get reparation, or feel they are not part of the process.

“We want to ensure that they have a choice. It will mean saying to the victim: here’s a list of options, what do you want to do? They may choose to go down the restorative route, and that they want someone to say sorry.

The home secretary’s intention to opt out of some areas of European policing and judicial co-operation has attracted strong criticism from senior police leaders and the Liberal Democrats.

May is expected to indicate at the very least that the UK will opt out of EU police and justice co-operation when the decision has to be made in 2014. This will be packaged up as part of the UK repatriating powers from Europe.

The European arrest warrant is seen by police and intelligence officers as one of the most successful of all instruments in European crime-fighting, helping speed up extraditions and the process of bringing to justice some of Europe’s most wanted criminals. If the UK opts out of all police and justice co-operation it can selectively opt back in to some of it at a later stage, provided other countries do so.

Victims of antisocial behaviour to decide on punishment