Appeal for return of Magna Carta to Runnymead 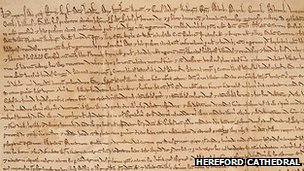 An appeal has been made for a copy of the Magna Carta to be returned to Surrey for its 800th anniversary.

Surrey County Council is calling for a copy to be loaned to a new visitor centre planned in Runnymead for the anniversary in 2015.

The Magna Carta was signed by King John in Runnymede Meadow in 1215.

Council leader David Hodge said: “Even being able to see a part of it at the site where history was made nearly 800 years ago would be incredible.”

Many copies of the Magna Carta were made and sent across England.

There are only four copies of the original 1215 Magna Carta still in existence – at Salisbury Cathedral, Lincoln Castle and The British Library, London.

Trial by juryA Surrey council spokesman said: “We have asked the Magna Carta 800th Anniversary Commemorative Committee to approach the holders of the four copies of the Magna Carta.”

The Magna Carta, which is Latin for great charter, is one of the most famous documents in English history.

Magna Carta was a peace treaty between King John and the barons who were in revolt against him and set out the principles of freedom under the law.

Only three of the 63 clauses in the Magna Carta are still in law.

One defends the freedom and rights of the English Church, another relates to the privileges enjoyed by the City of London and the third is generally thought to have established the right to trial by jury.

Epping MP Eleanor Laing calls for Magna Carta holiday Posted on 09th September 2011
What Price Justice? Posted on 28th May 2013
Ken Clarke is ready to betray 800 years of British justice Posted on 15th January 2012
Official: P**b is not offensive Posted on 27th September 2012
Update: Prison absconder arrested Posted on 17th July 2014
Update after appeal for witnesses after an assault in Bristol ukcri.me/62375 Posted on 28th May 2015
UPDATE: Man arrested after witness appeal to find man who assaulted train conductor in Blackpool South Posted on 20th January 2015
PROPOSED NEW BILL OF RIGHTS Posted on 14th December 2021
You'll Always Find Me In The Kitchen At Parties Posted on 30th March 2011
Look what can happen when you go shopping! Posted on 21st May 2012