Colin Port is stepping down as Avon and Somerset Police chief constable after nearly seven years in the job. 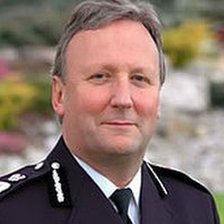 Colin Port is to leave the force in January

His decision comes a week on from the election of Sue Mountstevens to the new post of Police and Crime Commissioner (PCC).

The Independent candidate was sworn in on Wednesday.

Deputy Chief Constable Rob Beckley has been appointed acting chief constable during the recruitment process. Mr Port is to leave the post in January. 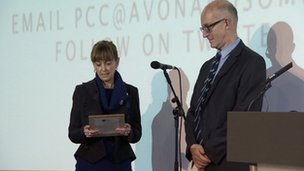 Sue Mountstevens was sworn in as PCC in Bristol on Wednesday

“He has increased detection rates and reduced crime.


“He will be greatly missed and I wish him every success for the future.”

Mr Port has been chief constable of Avon and Somerset Police since January 2005 after transferring from Norfolk Constabulary.

His career began with Greater Manchester Police in 1974 and he also served with Warwickshire Police.

In 1994, Mr Port worked for the United Nations as investigations co-ordinator with the International Criminal Tribunal for the former Yugoslavia.

He was also director of investigations for the International Criminal Tribunal for Rwanda, and between 1999 and 2002 he was seconded to Northern Ireland to investigate the circumstances surrounding the death of Rosemary Nelson.