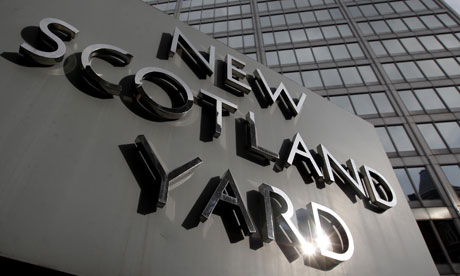 New Scotland Yard, the headquarters of the Metropolitan police.

Two police officers cleared in court of racially aggravated harassment could still face disciplinary action after a watchdog found they may have a case to answer for gross misconduct.

At Westminster magistrates court on Thursday, constables Kevin Hughes, 36, and David Hair, 42, were also found not guilty of using threatening words or behaviour to cause alarm and distress.

But on Friday the Independent Police Complaints Commission (IPCC) urged Scotland Yard to “seriously consider” its findings in relation to the case.

“Any misconduct hearing will need to determine whether the comments are a breach of the professional standards expected of police officers.”

Hughes, of Brentwood, Essex, admitted saying a black man looked like a monkey but said it had nothing to do with his race and he was pointing him out during a discussion about evolution, the court heard. On Thursday the chief magistrate Howard Riddle found Hughes’s language had been “unacceptable and offensive” but did not amount to a crime.

Hair, of Epping, Essex, stood trial for allegedly telling a black female colleague he thought she was going to rant about overtime and not do any because she was “going home to cook bananas”. He said he was “mortified” when Hughes suggested the comment could be taken as having racist connotations.

Both officers were suspended following the allegations, and Scotland Yard is now considering whether to take disciplinary action. Commander Allan Gibson, of the Met’s directorate of professional standards, said: “As soon as the actions of these officers were brought to [our] attention, the matter was taken seriously and, following careful consideration, referred to the IPCC.

“The commissioner has made it quite clear that racism is not acceptable within the Met. This is a view supported by the majority of officers and staff. Now that criminal proceedings are complete, and it should be noted they have been found not guilty of any criminal offences, we will now consider misconduct proceedings.”