New police commissioners to press Theresa May for cuts rethink 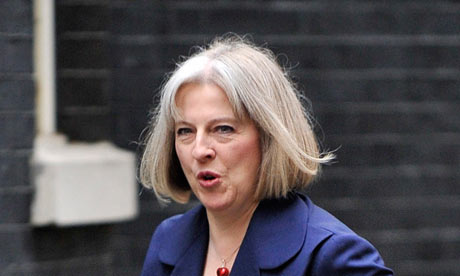 Theresa May, the home secretary, will meet 41 newly elected police and crime commissioners at a Home Office ‘welcome event’.

Newly elected Labour police and crime commissioners who meet the home secretary, Theresa May, for the first time on Monday are to press her for a radical rethink of her strategy of imposing 20% budget cuts.

The home secretary will meet 41 newly elected police and crime commissioners at a Home Office “welcome event”. She is also expected to face pressure to review the growing private sector involvement in policing.

The newly elected PCCs claim that audits undertaken in the last fortnight show that the financial situation facing their forces as a result of Whitehall spending cuts is worse than they had thought.

Commissioners and chief constables have both warned that forces cannot cope with a further round of police spending cuts without doing serious damage to frontline policing.

The meeting is being held as some newly elected police and crime commissioners have already attracted criticism for appointing deputies on salaries of up to Â£68,000 a year without advertising the jobs. In Northamptonshire the Conservative PCC, Adam Simmonds, has already appointed four “assistant commissioners” on Â£65,000 salaries each, including one for “governance” who was his election agent.

Alan Charles, Labour’s commissioner in Derbyshire, said it was time for May to rethink her cost-saving strategy that had already led to the loss of thousands of frontline police officers across England and Wales.

“Derbyshire has already endured painful losses in police numbers and any continued drive to realise further savings from the police budget, above those we already face, will leave us in a very vulnerable position in future,” he said.

He said that they would be seeking assurances from the home secretary that the forthcoming consultations over the 2013/14 police budgets would be a two-way conversation rather than simply an imposition of another round of cuts. It is expected that draft Home Office proposals for police funding covering the next two financial years 2013 â€“ 2015 will be published in the next two weeks.

“The current plans continue a path that has led to the loss of nearly 7,000 frontline officers to date with 15,000 police set to have been lost by 2015,” said a Labour party spokesman.

Several PCCs are to press the home secretary for a “fair” funding deal for their forces arguing that the current funding formula penalises large urban areas such as the West Midlands at the expense of rural forces, such as Surrey.

But the home secretary has insisted that forces can absorb the 20% cuts in Whitehall funding without damaging frontline policing if they are prepared to undertake “transformational” partnerships with the private sector to reduce back office costs.

Bedfordshire’s chief constable, Alfred Hitchcock, yesterday became the latest senior police officer to warn about the impact of budget cuts: “We have done well but we have come as close as we can to being as lean as we can, without real damage.

“There is a genuine worry of what the future will look like. If there is another round of cuts…we would be forced into adopting a far more responsive style,” he said.

New police commissioners to press Theresa May for cuts rethink