Anybody fancy driving a coach and horses through this nonsense?

Scandal of 23,000 police who have two jobs: Officers face new curbs on moonlighting as figure soars by nearly 20% in a yearÂ

Police are facing new curbs on taking second jobs after a Mail on Sunday investigation found that more than 23,000 officers and staff are moonlighting in their spare time.

The figure has soared by almost 20 per cent in a single year â€“ meaning more than one in ten officers in England and Wales now supplement their income with extra work. It raises serious questions about whether officersâ€™ outside interests conflict with their police duties â€“ and has prompted a near tripling of the number of investigations into potential breaches of the rules.

Work carried out by off-duty officers and staff ranges from a counter-terrorism specialist working as a vicar to a personnel assistant teaching pole-dancing. There are also four pallbearers, an undertaker, an assistant coroner, a ski instructor, an ice-cream salesman and a medium.Â Â 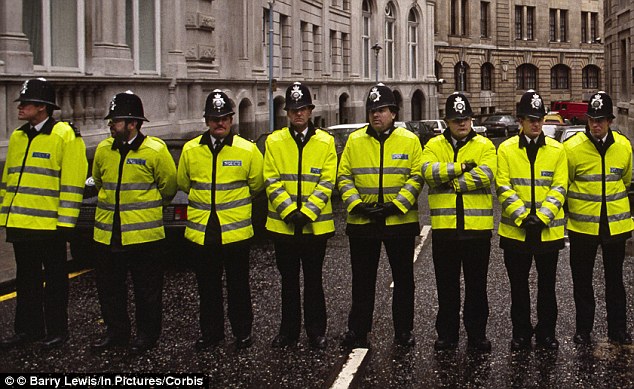 A shocking one in 10 police officers are combining their work with a second job, a Mail on Sunday investigation revealed.

Dozens more officers cash in on their skills, offering training in self-defence or firing Taser guns. The disclosures come as the police, who are clashing with politicians over cuts, endure intense scrutiny over the Andrew Mitchell â€˜Plebgateâ€™ affair.

Last night, politicians from all parties called for a clampdown, and Labourâ€™s Keith Vaz announced that the Commons Home Affairs Committee, which he chairs, will investigate.

He said: â€˜I am very surprised by the large number of police with second jobs. It would be quite wrong if chief constables are turning a blind eye to this. Second jobs should not create a conflict of interest or result in police neglecting their duties in protecting the public and catching criminals.â€™Â

Fellow committee member, Tory Mark Reckless, said: â€˜I am worried that police shifts are being driven by the convenience of officers to hold down other jobs rather than by the needs of the public.â€™

The issue of second jobs could also be included in moves against police corruption to be announced soon by Home Secretary Theresa May.

A Home Office spokesman said: â€˜It is the responsibility of chief constables to ensure that any secondary jobs held by officers do not harm the publicâ€™s perception of the police or result in any conflict of interest.

â€˜The Home Secretary will put new proposals ensuring the highest standards of integrity in the police to Parliament in the New Year.â€™

A Home Office source added: â€˜We have always suspected chief constables understate the true scale of second jobs. Clearly, police have to work a shift system but their pay and conditions are excellent. They earn enough to focus on their police duties without being distracted by second jobs.â€™

Astonishingly, some forces could even be contributing to police officersâ€™ second salaries â€“ for example by commissioning self-defence training from an off-duty officer. A total of 23 of the countryâ€™s 44 forces did not cross-check their supplier lists to see if they were paying companies run by their own officers.Â

Meanwhile investigations into second jobs have soared. In the nine months to May, 154 probes were carried out â€“ more than 17 a month â€“ whereas in the entire previous year there were just 82, or fewer than seven a month.

The most recent investigations led to 65 warnings and ten officers leaving their forces, either by resigning, retiring or being sacked. In 35 cases, the officers were cleared while the rest are still ongoing.

Steve Williams, the acting chairman of employeesâ€™ body the Police Federation, said: â€˜Iâ€™m afraid itâ€™s a sign of the times â€“ police officers have got to make ends meet. In an ideal world they wouldnâ€™t have to take a second job because itâ€™s hard enough being a police officer. Itâ€™s a sad indictment that police officers have to look elsewhere for work.â€™

Police officers and civilian staff in England and Wales can run companies or hold down second jobs in their spare time but they must be cleared by their bosses first. Unless there is a direct clash â€“ such as running a pub, private security work or being a magistrate â€“ permission will almost always be granted.

Despite the demands of fighting crime, officersâ€™ shift patterns often allow them to take on extra work. Until recently, those on the frontline would regularly work four days or nights on then have four days off.

Forces are now moving to different patterns, but police are still meant to be given their rosters more than a month in advance, allowing them to schedule their second jobs. An updated register published by Scotland Yard this month shows its officers have declared 3,445 business interests, up from 3,041 two years ago. Jobs include 314 drivers, 60 entertainers (including magicians), six flower arrangers, a toastmaster and a vicar.

Dozens of police in rural areas are farmers and fishermen â€“ and one constable in Staffordshire finds time to do â€˜casual work in Australiaâ€™. A business interest declared in Thames Valley relates to the sex shop chain Ann Summers.

Some officers have previously been jailed for devoting more time to their second jobs than their main ones. In 2010, Mohammed Sadiq Patel received a nine-month sentence for misconduct in public office, having worked as a marriage registrar when he was meant to be on duty as a beat manager in Bolton.

See: The PC Vicar and the pole-dancer: He worked in counter-terror. She supports Norfolk police.

BRIAN PADDICK, former Deputy Assistant Commissioner of the Met Police, says: We had no time for a second job back in my day