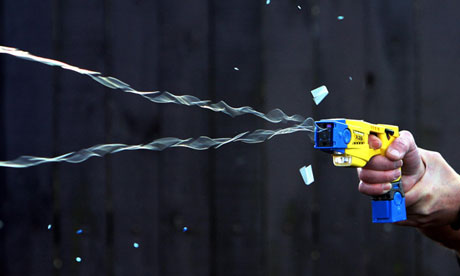 Taser stun guns: a Lancashire man is challenging the legal right of UK police to use them after he was shot with one due to a misunderstanding.

A blind stroke victim has made a claim for compensation after he was shot in the back with a 50,000-volt Taser stun gun by a police officer who mistook his white stick for a samurai sword.

Colin Farmer, 63, collapsed in shock and believed he might be dying from another stroke.

The incident happened on 12 October after reports were received of a man walking through the town centre in Chorley, Lancashire, with a martial arts weapon.

Farmer, who has had two strokes and walks at a “snail’s pace”, was on his way to meet friends at a pub for a drink and did not realise anything was wrong until the officer Tasered him.

He sent a letter to Lancashire police on Wednesday, claiming damages for assault, false imprisonment and a breach of his human rights. He is also seeking a declaration of incompatibility from the high court in relation to the use of the Taser.

An investigation by the Independent Police Complaints Commission is under way. Lancashire police were unable to comment.