Man shot with Taser by police dies in hospital

Police watchdog investigates death of Martin Baskeyfield, who was admitted to hospital days after arrest 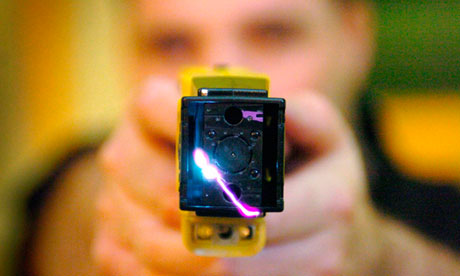 A man shot by police using a Taser during his arrest has died in hospital. Martin Baskeyfield, 44, was detained for motoring offences on 29 September last year. During the arrest he was subdued by officers who shot him using the Taser stun-gun.

Five days later he was admitted to the University Hospital of North Staffordshire. He died on 14 January.

Charges of motoring offences levelled against Baskeyfield were withdrawn after his death. Medical tests are being carried out to determine whether there is a link between the use of the Taser, more than three months ago, and his death.

Following his arrest, Baskeyfield’s relatives made a complaint to Staffordshire police over the level of force used. The force referred the incident to the Independent Police Complaints Commission.

An IPCC spokesman said: “The IPCC is independently investigating the arrest of Martin Baskeyfield in Stoke-on-Trent. During the arrest in Cotterill Grove, he was Tasered and was later charged with offences and released on bail.

“On 9 October 2012, Staffordshire police received a complaint about the police use of force during the arrest. The IPCC investigation continues into the full circumstances of the arrest.

“Sadly, Mr Baskeyfield passed away in hospital on 14 January this year. A Home Office postmortem is being conducted to determine cause of death and the coroner has been informed.”

Staffordshire police said it was co-operating fully with the IPCC investigation.

Man shot with Taser by police dies in hospital

Man aged 23 dies after Manchester police shoot him with Taser Posted on 11th July 2013
VIDEO: Restraint and being shot with a taser by a GMP officer lead to death of Jordan Begley say Inquest ukcri.me/62536 Posted on 06th July 2015
Attacked Officer Dies In Hospital Posted on 08th February 2013
Man dies after being arrested by police using Taser Posted on 17th August 2011
Man died after being shot with Taser gun Posted on 27th April 2013
Experimental Tasers fired at Raoul Moat before he killed himself â€˜had no effect on himâ€™ Posted on 15th September 2011
Oldham Stab victim sadly dies in hospital ukcri.me/61726 Posted on 16th April 2015
Thomas A Swiftâ€™s Electric Rifle to the rescue Posted on 15th August 2012
Pensioner dies after attack in hospital bed Posted on 06th October 2011
Witness appeal after man shot in the leg #Manchester #Longsight Posted on 08th March 2015