Cassieâ€™s Law: Unfit drivers to be banned from the road within hours of failing sight tests in memory of girl, 16, who was killed on pavement by 87-year-old

Cassie McCord, from Colchester, was killed on her way to school
She was hit by Colin Horsfall’s car three days after he had failed an eye test
However he refused to surrender his licence and continued driving
Cassie’s mother Jackie collected 45,000 signatures backing her campaign
Department for Transport says medically unfit drivers will be taken off the road faster after two-year family campaign in memory of student 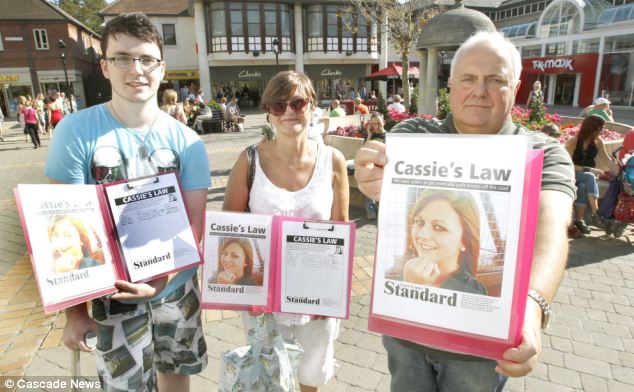 Police will be given powers to seize the licence of medically unfit drivers after campaigning by Cassie’s mother Jackie, pictured with her daughter’s boyfriend Daniel Gordon, left, and her husband John Rason, right. She collected 45,000 signatures.

Drivers who are medically unfit to take the wheel will lose their licenses in a matter of hours after 45,000 people signed a petition in memory of a 16-year-old girl who was killed by a partially sighted 87-year-old.
Cassie McCord was hit by Colin Horsfall as she stood on the pavement, three days after he failed an eye test but refused to surrender his licence.
Her mother Jackie has campaigned for the past two years for a law to instantly bar unfit drivers.
The Department of Transport (DfT) has now announced it is working to ‘accelerate’ the process to enable officials to seize licences more quickly.
Currently, it can take days to revoke the licence of someone who has been deemed a danger by police.
But now the DVLA will inform people they can no longer legally drive within hours of being tipped off by police officers.
Although not a change in legislation, the procedural improvement has been dubbed Cassie’s Law and has been hailed by police as a potential life-saver.
Mrs McCord, from Colchester, Essex, said: ‘I am confident this is a really good solution.
‘The fact the Department for Transport has listened to someone like me who has no power is amazing.
‘Next week it will be two years since Cassie died. The timing could not be better.’
Cassie, who wanted to become a lawyer, was on her way to college when she was killed.
Police were in the process of trying to get Mr Horsfall’s licence revoked when Cassie died.
Three days before he had driven into the exit of a petrol station in Colchester and then failed a police eye test.
He walked with a stick and used a zimmer frame but despite being urged to surrender his licence, he refused.
Police were applying to the DVLA for his licence to be revoked but the process took days.
Mrs McCord had campaigned for a change in the law but the DfT said it instead has strengthened procedures to enable medically unfit drivers to be stopped quicker.
Under the previous system it would take the police up to four working days to notify the DVLA via post or fax.
The new plans will enable police to tell the DVLA about eye test failures more quickly through a new electronic system.
Drivers will be told they are not allowed to drive within a matter of hours of failing the test.
Those who drive after their licence has been revoked could be fined up to Â£5,000 or sentenced to up to six months in prison.
From The Mail