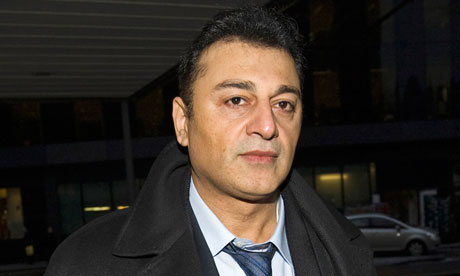 Ali Dizaei has been tried and convicted twice over the charges.

The former Scotland Yard commander Ali Dizaei has lost his appeal against a conviction which ended the career of one of the most controversialÂ policeÂ officers in recent times.

TheÂ court of appealÂ on Thursday upheld a jury’s decision last year that Dizaei had framed a man, Waad al-Baghdadi, in a row over money.

Last February a jury at Southwark crown court convicted Dizaei of the offences after deciding unanimously he was lying when he claimed Baghdadi had threatened him and assaulted him outside a westÂ Londonrestaurant in July 2008.

The decision upholding Dizaei’s convictions for misconduct and perverting the course of justice was made by the Lord Chief Justice Lord Judge and two other judges at the court of appeal in London.

Dizaei has been tried and convicted twice over the charges. The first conviction was overturned by an earlier court of appeal judgment after it emerged Baghdadi was a serial benefits fraudster.

After the first conviction in 2010 Dizaei was jailed for three years.

In the latest appeal, Dizaei’s QC, Stephen Riordan, argued that the conviction was “unsafe”, submitting that the judge at the second trial had made an “error of law” when he refused to admit certain “bad character” evidence relating to Baghdadi.

Riordan said because of the judge’s decision to reject the application the jury “did not have all the material that it should have done”. He told the court: “We submit simply that that decision was wrong â€“ that the reasons he gave for refusing to allow this material to be deployed were matters which more properly should have been considered by the jury.”

Opposing the appeal, Peter Wright QC, for the crown, told the court: “Here there was no error by the judge in the exercise he undertook. The decision was not wrong in law. We submit that in the context of the fairness of this trial, that this trial remained entirely fair and that the conviction was not unsafe.”

The second trial saw the jury take 11 hours to unanimously decide Dizaei was lying when he claimed Baghdadi had threatened and assaulted him outside a west London restaurant in July 2008.

Dizaei, 50, was convicted of misconduct in public office for abusing his powers to falsely arrest Baghdadi, and perverting the course of justice for filing false accounts of the incident.

In July 2008 Dizaei had clashed with Baghdadi, who claimed the police commander owed him Â£600 for a website he had designed. Dizaei then arrested Baghdadi, and claimed to have been assaulted and poked in the stomach with the mouthpiece of a shisha pipe. Baghdadi spent 24 hours in a cell and six weeks on bail before it was decided he would not face charges.

Dizaei’s 27-year police career ended with him being drummed out of the force in disgrace.

At the first trial it was claimed Baghdadi was an honest man and of good character. But the jury heard Baghdadi had been convicted in September 2011 of committing benefit fraud by claiming Â£27,000 in the name of his dead father, from 2007 to 2010, and sentenced to eight months’ imprisonment.

The jury also heard Baghdadi gave false details in the first trial about his name, age and date of birth; and was accused of glassing a man in the street outside a London nightclub in September 2009, according to two witnesses who testified in court.

The clash with Baghdadi was during the summer of 2008 when Scotland Yard was engulfed in a race row. Dizaei was the main adviser to the assistant commissioner, Tarique Ghaffur, who accused his bosses of racially discriminating against him.

The Met had previously spent at least Â£4m investigating Dizaei over a series of separate allegations, but that ended in 2003 with his acquittal, after which he returned to work where he won promotions and commendations.