Police dog handlers are all too aware of how crucial their 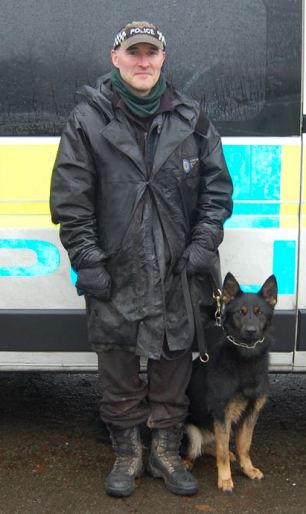 four-legged colleagues are in the investigation of many crimes.

Joke: Police are under investigation for jokingly filling in a witness statement in the name of force dog ‘PC Peach’, pictured with his handler

However, when the CPS demanded a witness statement in the name of a force dog, officers realised that it would be taking their canine skills a step too far.

They wrote back explaining that PC Peach was in fact PD Peach, stressing that PD stood for police dog but to no avail.

Eventually, the exasperated handler completed a form as if it had been written by the Alsatian, signing it with a paw print.

It stated that the age of the witness was â€œfourâ€ and that his number was PD4341. 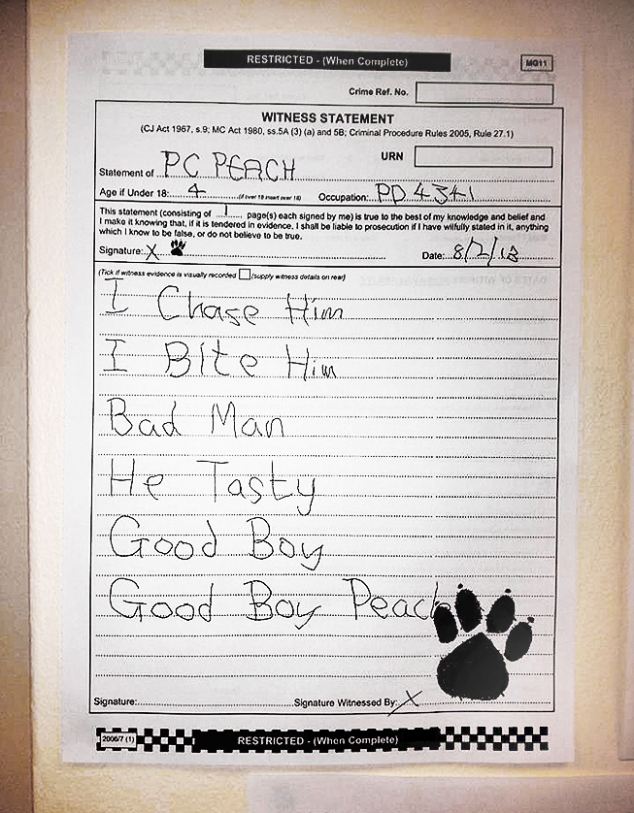 The document was pinned to the wall at West Midlands Police Station, much to the amusement of colleagues.

One officer took a photograph of the statement and it soon appeared on Facebook and on several police Twitter accounts, including West Yorkshireâ€™s Police Dog Unit, which wrote: “PD Peach called to give evidence. Would have loved to have been there.”

The widely circulated picture was accompanied by the caption: â€œCPS demanded a statement from “PC Peach,” who is actually PD Peach.

â€œThey were told several times Peach was actually a police dog but insisted on a written statement so the case handler sent them this.â€

One Facebook user wrote: â€œTypical of the CPS being dogmatic about getting statements from literally everyone present! I bet they are woofing it down!”

And another asked: â€œDoes CPS stand for Clown Prosecution Service?”

The CPS, however, failed to see the funny side and complained to the police that their mistake had been turned into a very public joke.

PC Mark Tissington, of West Midlands Police, who is believed to have shared the original picture of the witness form, has referred himself to the internal discipline unit although sources suggested it was unlikely to be reprimanded.

Ian Edwards, chairman of the West Midlands branch of the Police Federation, said: â€œIt’s a difficult time for police and sometimes humour is a way of venting frustrations.

“I would urge our Professional Standards Department to be even-handed in the way they deal with it.â€

See: The Statement written by a DOG: