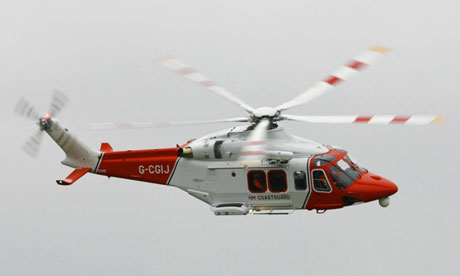 A Maritime and Coastguard Agency helicopter. Tory MP Richard Drax has complained of a gagging order on discussing privatisation of the search-and-rescue service.

The government has been accused of gagging the chief executive of the coastguard agency over theÂ privatisation of the search-and-rescue helicopter service.

A Tory MP on Tuesday claimed ministers were acting in an “almost Orwellian” way by banning the head of the Maritime and Coastguard Agency,Â Sir Alan Massey, from discussing the scheme with him.

Richard Drax, MP for South Dorset, has been trying to speak to Massey about theÂ privatisationÂ project under which the largely military operation would become entirely civilian â€“ and close the helicopter base at Portland in his constituency.

But he received an email in which Massey said he had been told by the government not to talk about the matter.

It said: “I fully understand your wish to speak with me about an issue that I know causes you great concern.

“[The] minister has, however, determined that he does not wish me, as an official, to re-engage on a matter on which the government (and he personally) has made its position clear.”

Massey, a navy vice-admiral who commanded warships including Ark Royal, said the coastguard agency had not been involved in decisions relating to the search-and-rescue service but had provided “operational and technical advice”.

Drax, a former army officer, has written to the transport minister,Â Stephen Hammond, asking him if he had banned agency officials from speaking to him.

He said: “I find it quite extraordinary that an MP should be prevented from speaking to anyone on behalf of his constituents. It really is almost Orwellian and totally out of character with Conservative policy and principles.”

Drax felt he and his constituents were being treated with “disdain” by the government and he believed it was crucial he spoke to Massey before the “disastrous decision” to shut Portland came into effect.

This spring the governmentÂ will announceÂ the name of the private contractor or contractors that will be charged with providing search-and-rescue capability â€“ helicopters and staff â€“ for 10 years from 2016.

Search-and-rescue experts, doctors, workers in the maritime industry, and people who have been rescued fear a civilian service will not be as effective as the one now provided mainly by RAF andÂ Royal NavyÂ pilots, crew and ground staff.

There are also worries that plans to cut two of the 12 search-and-rescue bases, including Portland, dotted around Britain’s coastline will leave some areas exposed, particularly in the Channel. The government claims faster, better helicopters will provide an improved service.

Drax has said he had been told by workers within the service that the closure of Portland, which covers one of the busiest shipping and marine leisure areas of the world, would lead to more lives being lost. The Portland base is one of four run by the agency while the navy and RAF operate the other eight.

In his letter to Hammond, Drax says: “When someone dies off our coast because a helicopter did not reach them in time, I’m afraid this government will be held responsible.”

Louise Ellman, the chair of the Commons transport select committee, said: “I’m concerned about this issue and I hope the minister can reconsider Richard’s request.”

Roger Macpherson, a spokesman for the Save Our Helicopter campaign group in Portland, said: “Richard Drax is the elected MP for South Dorset and as such, has the right to question decisions that affect his constituents. I find this gagging order a disturbing tactic in what I have always believed to be a country that leads the world in democracy.”

A spokesman for the Maritime and Coastguard Agency confirmed Massy had received a request from Drax and had replied to it but referred any further questions to the transport department.

The DfT said: “The minister’s view was that in light of numerous exchanges at ministerial level on this issue, including meetings with the previous secretary of state and the prime minister, there was no further ground to cover. The closure of the Portland base is something the government has made its position clear on and Mr Hammond met Mr Drax in early December to discuss these issues in depth. A further engagement with the MCA was therefore deemed to be unnecessary at this stage.”

Plus: Bristow Helicopter crews to train at Inverness Airport