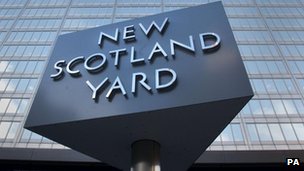 A former police officer has been arrested as part of an investigation into alleged illegal payments by journalists to public officials.

The 41-year-old man, who used to be in the Surrey Police force, was arrested at his home in Sussex at 06:00 BST as part of Operation Elveden.

He is being interviewed at a Sussex police station on suspicion of misconduct in public office.

He becomes the 62nd person to be arrested during the investigation.