Three out of four Ukip gains came at expense of Conservatives, which has lost control of two counties so far 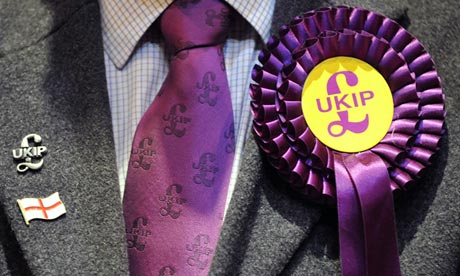 The anti-EU party had 42 councillors after results from seven authorities were declared overnight, capturing a remarkable 26 per cent of the votes in the areas where it stood. With most of the 34 councils holding elections yesterday not counting votes until today, Ukip is already on course to easily exceed experts’ predictions and have more than 100 councillors across the country.

Ukip showed it could perform well in the North by coming a strong second in the South Shields parliamentary by-eIection, caused by the resignation of David Miliband. Labour retained its safe seat with a reduced majority of 6,505. Ukip scooped up votes from the Conservatives and Liberal Democrats to land 24 per cent of those cast.

In the council elections, the Conservatives appeared to be the main victims as three out of four Ukip gains came at their expense. The Tories lost power in Lincolnshire and Gloucestershire to no overall control as Labour and Ukip made gains, but retained Essex and Somerset. The Liberal Democrats also suffered at Ukip’s hands are braced for a disappointing set of results. Labour increased its share of the vote by six or seven points and will be hoping to gain control in some county councils in the Midlands and North later today.

Although Ukip will not run any authorities, its strong showing across the country will shake the other parties and suggests that Nigel Farage’s party could come top in next year’s European Parliament elections.

“We want to change British politics,” Mr Farage told BBC Radio 4′s Today programme. He said the council results showed that a “settled majority” of the British people want to “get their country back” from the EU. Denying that Ukip’s performance would be a flash in the pan, he said the Reform Party in Canada went from one by-election victory to being the largest party in parliament.

John Baron, a Eurosceptic Conservative MP, described Ukip’s advance as a “wake-up call” to his party. He urged David Cameron to bring in a Bill in the next parliamentary session, starting next Wednesday, to guarantee an in/out referendum on Europe after the 2015 general election.

Grant Shapps, the Tory chairman, insisted it had been a bad night for all three main parties. His message to voters was: “We get it. We have heard you.”