A decorated Scotland Yard marksman unlawfully killed a suspected gangster in a bungled police operation that missed opportunities to arrest him peacefully, an official report into the death said today. 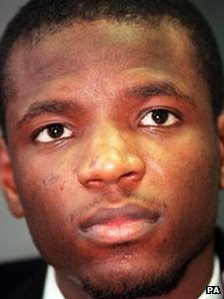 The Crown Prosecution Service has been passed the file on the retired officer known only as E7 who fired two fatal bursts of gunfire at Azelle Rodney, (pictured), without â€œlawful justificationâ€, the Metropolitan Police said.

The 24-year-old was killed on 30 April 2005 after undercover police teams rammed the car carrying three men including Mr Rodney who were believed to be on their way to rob a group of Colombian drug dealers of a stash of cocaine. They had been under surveillance for several hours and had been followed before the shooting in Mill Hill, north London.

E7 was supposed to provide cover for his colleagues but retired Judge Sir Christopher found that he had changed his story and there was little or no justification for seven of the eight shots he fired at Mr Rodney.

They included a military-style â€œdouble tapâ€ with two shots aimed by his right ear that â€œcould only result in a fatality and did soâ€.

â€œI have to find that there was no lawful justification of shooting Azelle Rodney so as to kill him,â€ the report said. In relation to the four fatal shots, Sir Christopher concluded: â€œI am wholly satisfied that firing so as to kill himâ€¦.was disproportionate and therefore unreasonable and unlawful.â€

Mr Rodneyâ€™s family had accused the officer of being â€œtrigger happyâ€ after it emerged that had previously shot four people, including two fatally, during the 1980s. During a 33-year career, the officer was commended for bravery for his role in the arrest of an armed man.

The file will now be passed to the Independent Police Complaints Commission but Sir Christopherâ€™s report cannot be used for a criminal inquiry, it is understood. E7 has already written to the inquiry team to dispute the findings of the report.

However, the report also poses serious questions over the nature of investigations into deaths at the hands of police after the watchdog, the Independent Police Complaints Commission, in December 2005 found nothing to criticise about the police operation and the prosecutors declined to bring charges against him the following year.

E7 â€“ whose identity was screened when he gave evidence during the 11-week public inquiry â€“ claimed that he believed Mr Rodney had picked up a gun and was about to use it. The hearing heard that he failed to shout a warning.

â€œEven had E7 enjoyed a clear view of Azelle Rodney he would have had no reason to believe that he had picked up a gun,â€ the report concluded.

In a damning report, Sir Christopher found that:

* E7 changed his story at the inquiry and his claims that Mr Rodney had picked up a gun could not be accepted.

* There was a â€œsystemic failure of communicationâ€ between the firearms team and senior officers running the operation.

* Opportunities were missed to arrest Mr Rodney before the â€œhard stopâ€ outside a crowded pub in north London.

* No threat assessment was carried out to address the dangers from different tactics and the senior officer co-ordinating the operation was not told of a helicopter providing surveillance overhead of the pursuit.

Sir Christopher Holland did not comment on the possibility of criminal prosecutions but called for a full Metropolitan Police review of Operation Tayport.

Mr Rodney was one of nine people killed by Scotland Yard firearms officers between 2005 and 2011.