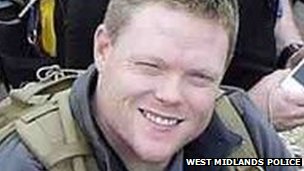 A teenager who killed an off-duty policeman with a single punch after a night out has been sentenced to three and a half years in a young offendersâ€™ institution for manslaughter.

PC Chris Findley, (pictured), was walking home at around 4am on 28 January last year when he was hit in an â€œunprovoked attackâ€ by Dale Dixon, 19.

Wolverhampton Crown Court was shown graphic CCTV footage of the moment Dixon ran up to PC Findley and punched him in the face, causing him to fall backwards. He suffered a skull fracture, and died ten days later in hospital.

Judge John Warner said PC Findley was on his way home after a night out when he was confronted by one of two women Dixon was with, and was forced to push her away just seconds before he was hit.

Mr Warner said: â€œOne of the women simply would not leave him alone. He was obviously trying to leave the scene as best he could.

â€œIf she had simply let things go, I very much doubt we would be where we are at court today.â€

Dixon then sprinted up behind the off-duty officer, punching him as he turned his head. Afterwards the 19-year-old put his victim in the recovery position and called an ambulance, before fleeing in a taxi.

The teenager pleaded guilty to manslaughter at an earlier hearing.

Addressing Dixon directly in court today, the judge said: â€œYou are a young man of big build and the blow was hard enough to break his nose in three places and knock him out.

â€œAn innocent man has unnecessarily and tragically lost his life. You had no intention of causing really serious injury, let alone anything worse but, as a result of your violent action, a man has died.â€