Some Bedfordshire police stations could be relocated to supermarkets to help bridge a funding gap, its Police and Crime Commissioner said.

Olly Martins, (pictured), said the force, which has to save Â£7.5m over the next two years, spends Â£3m 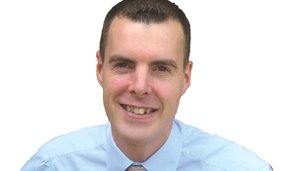 a year on its buildings.

But changes in policing technology meant officers could now share facilities, he added.

The Police Federation said it would be concerned that officers in shops may look â€œunprofessionalâ€.

Mr Martins said many of the countyâ€™s police buildings were in need of refurbishment and no longer in the best position to serve the public, while others were under used.

An online public survey opens on Friday to asses [sic] (Ed: but probably an appropriate word), residentsâ€™ views. The survey answers will help gauge support for replacing some stations with more accessible facilities in public areas such as public buildings and supermarkets.

The PCC said operational policing was already running at maximum efficiency, so he must look to other areas.

Changes to modern policing due to the use of technology, meant â€œinnovative ways of increasing access to the police while reducing overheadsâ€ could be considered, he added.

â€œIn the future officers will be able to carry out much of their communications and administrative tasks while on the move, which reduces the demand on premises and increases their visibility,â€ he said.

He said no decisions had been taken yet but â€œtough choicesâ€ needed to be made.

Ray Reed from Bedfordshire Police Federation, said he was not resistant to change, but â€œhad concernsâ€ over response times and perception.

â€œPeople already complain about response times and if you close down stations it will make things worse,â€ he said.

â€œPlus I would be worried about how police would be perceived in supermarkets, it may look unprofessional.

â€œAnd [in public buildings] there is a risk element as you may get someone becoming aggressive in full view of the public.

â€œ[Police carry out] sensitive functions in the community and we have to think how and where we place them.â€