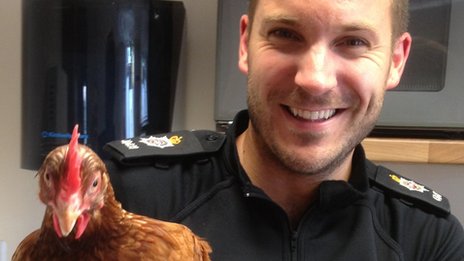 Chickens found â€œroastingâ€ in a locked car have been rescued from soaring temperatures by Surrey Police.

The four birds were spotted in a car in Village Way in Cranleigh on Thursday afternoon but the owner could not be found.

PC Tony Kerby said: â€œThe chickens were clearly very unhappy and it was pretty clear they were suffering in the extreme temperatures.â€

He rescued the poultry from the car and they were cooled down with fans.

â€œThey were in a bad way and needed immediate assistance, so with help from colleagues, I managed to bring the birds inside the office where they were given water and helped to cool down with some fans,â€ Mr Kerby said.

The owner of the car later returned to his vehicle and was spoken to by police.

Police and and the RSPCA are considering whether further action is to be taken.