Two brothers sought over the death of a man found stabbed at a house in Surrey have walked into a police station. 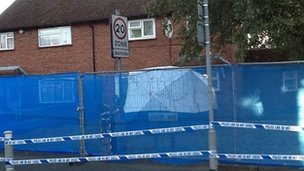 The 22-year-old man and 14-year-old boy were arrested on suspicion of murder on Wednesday night.

The body of the man, who was in his 50s, was found at an address in Cedar Way, in the Bellfields area of Guildford, on Tuesday morning.

A 49-year-old woman arrested on suspicion of murder has been released on police bail until 29 August.

A 16-year-old boy also arrested was released with no further action.

The victim has not yet been formally identified, and the results of a post-mortem examination have not been released.

The area has been cordoned off while officers carry out house-to-house inquiries and forensic examinations.