Yvette Cooper promises to help forces increase diversity, even if it means law has to be changed. 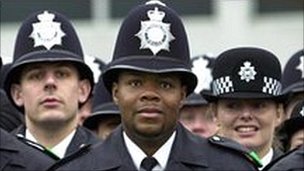 Police chiefs will be encouraged to favour ethnic minority candidates when it comes to recruitment and promotion, even if the law has to be changed to allow them to do so, under new proposals from Labour.

The pledge to help forces increase the diversity of their officers will be made by the shadow Home Secretary, Yvette Cooper, in a speech at the Police Superintendentsâ€™ Association of England & Wales (PSAEW) annual conference tomorrow.

Although the proportion of black or ethnic minority officers has almost doubled in the past decade, from 2.9 per cent to 5 per cent, progress has slowed between 2011 and 2013, according to the latest government figures.

â€œModern effective policing relies on the police being able to work with and be trusted by local communities,â€ Ms Cooper said.

Many senior officers see increasing diversity as crucial to operational requirements, but just 5 per cent of police officers in England and Wales are from an ethnic minority background â€“ compared with around 14 per cent of the population.

â€œAt a more senior level the representation is even lower, with just 48 BAME [black, Asian, minority ethnic] superintendents and chief superintendents â€“ the equivalent of one per force,â€ Ms Cooper added.

â€œEvery force should be required to have policies in place for BAME recruitment, retention and promotion. It is time to look at changes to the legal framework to make sure police forces are able to pursue effective targeted recruitment programmes to meet operational needs and reflect their communities.â€

Sir Peter Fahy, chief constable of Greater Manchester Police, who earlier this year called for more to be done to encourage positive discrimination, said: â€œIt is not about targets or political correctness but having a workforce that can deal with the problems of crime and the vulnerability a more diverse society presents.â€

Charles Crichlow, president of the National Black Police Association, welcomed the proposals. â€œAffirmative action is where you select from equally qualified candidates so thereâ€™s no question that you are selecting individuals who are not qualified,â€ he said.