Just days after police were told by the Home Secretary they â€˜have only one target, to 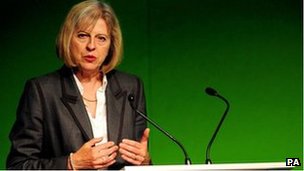 reduce crimeâ€™ it has emerged forces have been have set 178 in less than a year.

Despite Theresa Mayâ€™s pledge to cut red tape officers are having to deal with even more brought in by police and crime commissioners (PCCs), it emerged today.

The Association of Police and Crime Commissioners said today these targets had â€˜no resemblanceâ€™ to previous Government goals and are based on what communities in England and Wales want.

Mrs May championed PCCs as the â€˜voice of the peopleâ€™ when they were elected outside London last November to replace police authorities.

But it has been revealed that many have brought in dozens of new performance targets since taking office.

Leicestershire has brought in the most â€“ 26 â€“ which will be measured against satisfaction surveys and crime figures.

Norfolk has brought in targets to reduce crimes at certain times of night while Thames Valleyâ€™s ten include 40 metal theft operations per year and to â€˜disrupt 20 problem and organised crime groups that prey on vulnerable people and isolated communitiesâ€™.

A BBC survey found18 of the 41 PCCs have set new targets.

But since Theresa May became Home Secretary in 2010 she pledged to begin â€˜dismantling targetsâ€™ and allow officers â€˜to pursue the crimes and criminals you believe you shouldâ€™.

At the 2011 Tory conference she said A year later she said she â€˜hadnâ€™t asked the police to be social workers, Iâ€™ve told them to cut crimeâ€™ and this year said she had â€˜got rid of Labourâ€™s plethora of targetsâ€™.

them: â€˜No more action plans, no more attempts by me to second guess your operational decisions.

â€˜I have given up the old Home Office practice of issuing centralised, top-down diktats. I am not going to try to micro-manage what you do. You now have only one target: to reduce crimeâ€™.

But instead they appear to be dealing with more.

â€˜Police and crime plan objectives bear no resemblance to previous central government targets. Police and crime commissioners put their draft five-year plans out for public consultation and used the comments they received back to shape local priorities to fight crime,â€™ he said.

â€˜Police and crime plans are designed to reflect the views of local people and not constrain police officers from cutting crimeâ€™.