Two years on, and a corner of countryside blighted by traffic is transformed by miracle of engineering

They look worlds apart â€“ a trunk road buzzing with traffic and the stunning beauty of remote heathland.

Yet these astonishing photographs show how what was once a notorious traffic bottleneck has been returned to nature.

Just two years ago, the busy A3 skirted the edge of the Devilâ€™s Punch Bowl, near Hindhead in Surrey. 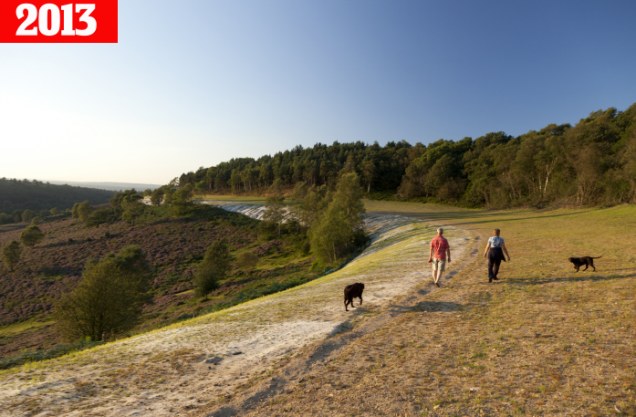 The route of the old A3 main road is now a ramblersâ€™ paradise â€“ grassed over at the Devilâ€™s Punch Bowl in Hindhead Common, Surrey

Queuing cars pumped out fumes and blighted this area of outstanding natural beauty â€“ featuring a natural amphitheatre that gives the popular spot its name.

Before it opened, this stretch of the main London to Portsmouth road was regularly clogged as drivers were funnelled on to its single lanes between sections of dual carriageway.

More jams were caused by traffic lights as the A3 wound through Hindhead village.

Today, the Punch Bowl is reunited with Hindhead Common and the peace and quiet of the old route are a tribute to natureâ€™s ability to regenerate itself.

Main construction of the tunnel started in 2008 and when it opened in July 2011 it became the longest under-land road tunnel in the UK.

The development is said to have reduced peak-time journeys by 20 minutes. Above ground, the project has opened up new routes for joggers, cyclists and ramblers â€“ among them Downton Abbey star Hugh Bonneville who is regularly seen walking his dogs on the common.

And wildlife has benefited too. Protected birds such as Dartford warblers, woodlarks and nightjars, and heathland species such as silver-studded blue butterflies are now colonising the new wilderness for the first time in living memory.

large increase in walking groups and cyclists and ramblers and people coming here for the day from London.

â€˜The difference is the lack of traffic here now. It used to take five or ten minutes just to cross the road.â€™

Around 92 per cent of the soil shifted to create the tunnel has been relaid on top of the old road, sown with heather and planted with 200,000 new trees and shrubs as part of a National Trust restoration project.

The Highways Agency and its contractors, Balfour Beatty, also landscaped the area to begin to restore it to its natural contours, using 320,000 cubic metres of soil.

Kate Colley, 76, a member of the Godalming and Haslemere Ramblers, said: â€˜Since the tunnel opened, it has transformed the whole place.

â€˜The air quality is amazing and the noise levels nil.

â€˜The fact the old A3 is now a path is lovely. And over time it will only get better.

â€˜You really get the feeling you are in the middle of nowhere.â€™

More photos here - Two years on, and a corner of countryside blighted by traffic is transformed by miracle of engineering