Conservative MP Nadine Dorries has apologised to MPs for failing to properly register income made from her appearance on Iâ€™m A Celebrity in 2012. 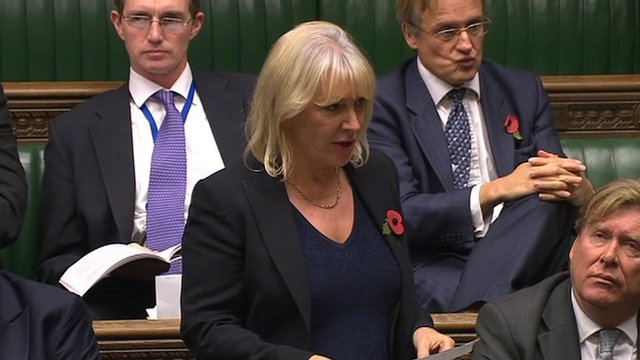 Ms Dorries said the breach of the rules had been â€œinadvertentâ€ but she owed MPs a â€œfull and unreserved apologyâ€. She cited a confidentiality clause and the fact the fees were paid to a firm of which she was a shareholder for not declaring the outside earnings. But the standards committee said she must apologise.

The standards commissioner also criticised the MP for Mid-Bedfordshire for not co-operating with their inquiry, saying this amounted to a â€œserious breachâ€ of the MPsâ€™ code of conduct.

However, it said it believed that the MPâ€™s failure to register her financial interest as a shareholder in the Averbrook media consultancy until June 2013 was â€œinadvertentâ€ rather than deliberate.

The standards committee of MPs, which has the power to sanction members in light of the commissionerâ€™s findings, said the MP should make a â€œpersonal statementâ€ to the House to apologise.

The MP lost the Conservative whip when she appeared on Iâ€™m A Celebrity in 2012 but Ms Dorries said she succeeded in communicating her views to a wider audience and her constituents had continued to be represented while she was in Australia, where the show is filmed.

The issue of Ms Dorriesâ€™ income from TV appearances, including the ITV show, was referred to the watchdog earlier this year following a complaint by Labour MP John Mann.

The watchdog found she had not recorded details of eight separate media appearances on six different programmes in the register of MPs financial interests.

If the MP had been paid for any of these appearances, the watchdog said it would represent a breach of the rules â€“ requiring MPs to disclose time spent on their outside employment and the amount of money they make.

â€œThe omissions from Ms Dorriesâ€™ entry means that constituents, other members and the wider public do not have access to this information in her case,â€ the commissioner said. â€œThe omissions also have the potential to undermine public confidence in the completeness and accuracy of the register.â€

In a letter to the committee last month, the MP said she â€œunequivocally never sought to impedeâ€ the inquiry in any way.

â€œIn respect of both the code and guidance there is unfortunately an ambiguity, which fails to make clear to members their responsibilities in terms of the declaration of outside interests and contractual obligations,â€ she added.

Ms Dorries updated her entry on the register in October. It showed Averbrookâ€™s turnover for the previous year was Â£142,000, yielding a profit of Â£82,000. It also showed Ms Dorries took a Â£10,000 dividend at the end of the month.

Ms Dorries told the standards committee that if she disclosed how much she had been paid by ITV she would â€œfall foulâ€ of the contractâ€™s confidentiality clause but the MPs said requirements to provide information to Parliament â€œoverrodeâ€ confidentiality agreements.

The MPs said the disciplinary system in the Commons â€œdepended on members being prepared to explain their conduct, to submit to public scrutiny and where necessary, to respond to the commissionerâ€™s inquiriesâ€.

â€œWe recommend that Ms Dorries register all payments in respect of her employment, whether or not they have been channelled through Averbrook or any other third party and apologise to the House by way of a personal statement.â€

It also said the MP should seek advice from officials about her entries in the register before the end of the month and her future compliance with the rules would be monitored.

The MP had the whip restored in May and was recently re-adopted as the Conservative candidate to fight the next general election in her constituency.

The true nature of Ms Dorriesâ€™ â€œforgetfulnessâ€ in failing to register these payments is revealed by what she said about these very same payments in June 2013, following the release by IPSA of a short film and a statement about MPâ€™s expenses.

Speaking to Andrew Neil and the Sunday Politics panel, she stated that IPSA, the body that deals with MPsâ€™ expenses, is â€œpushing the boundaries of truthfulnessâ€ and should never have been brought in. She then commented on the payments made for her 2012 appearance on â€œIâ€™m a Celebrityâ€, stating that she had â€œnot personally benefittedâ€, and her fee had gone to a company covering her media appearances and writing. A company of which she was a shareholder, but her â€œforgetfulnessâ€ extended to omitting that from the register of MPâ€™s interestsâ€¦ what a coincidence!

It would be funny if it wasnâ€™t so seriousâ€¦ are ANY of them honest?