Public confidence in police and crime commissioners drains away 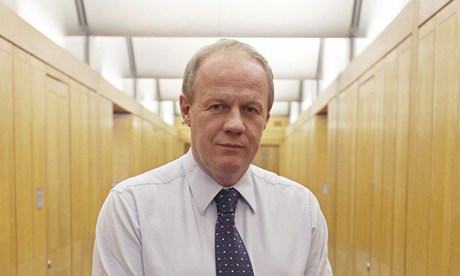 The limited public support for police and crime commissioners has drained away further in their first year of office, according to a survey that shows only 10% of people polled agreed that the commissioners gave them more say in how their local area was policed.

The public opinion poll, by YouGov, comes on the anniversary of the PCCsâ€™ introduction and as Home Office proposals are announced that would allow members of the public to have their â€œeveryday complaintsâ€ about the police dealt with by the commissioners.

A summer 2012 poll showed 27% expected PCCs would give them a greater say. In the new poll, only 9% of those polled thought PCCs had contributed to a fall in crime in their area.

The new complaints process, which would deal with issues such as rudeness by officers, is to be outlined on Thursday by the policing minister, Damian Green.

The PCCs oversee 40 police forces outside London and have the power to hire and fire chief constables.

Green will say that the â€œyear of bad headlinesâ€ that the police have endured means public accountability is even more important now.

A newly beefed-up Independent Police Complaints Commission is to deal with all serious and sensitive investigations involving the police.

But Green will tell the Association of Police and Crime Commissioners: â€œImportant as that step is, it does not tally with most peopleâ€™s day-to-day contact with policing. The vast majority of that is conducted with the utmost efficacy and professionalism. But when it is not, complaints [about] something as simple as basic rudeness can damage an individualâ€™s confidence in policing.

â€œI know PCCs are also concerned about complaints, and some of you would like a bigger role in dealing with them. The idea of involving PCCs more in the process has some obvious attractions. It would serve to increase accountability and transparency in the complaints system and, therefore, increase public confidence.â€

Green said the home secretary, Theresa May, had asked commissioners to work with Home Office officials on the best way to â€œestablish the right modelâ€.

He said: â€ Giving [commissioners] a stronger say in the complaints procedure could reinforce the role they play in sticking up for the people they and their police forces serve.â€

The home secretary said last week that the first-year record of police and crime commissioners had been â€œgood and badâ€. She said the 15% turnout for the elections, a record low in peacetime polls, had been disappointing and that some PCCs had already been the subject of official complaints investigations.

But she said that others were pioneering ways of integrating the three emergency services and developing new ways of working with the private sector.

Green also acknowledges that there have been concerns over PCCsâ€™ expenses, over their clashes with chief constables, and over the occasional questionable appointment.

But he says PCCs have also been responsible for innovations such as police mobile contact points, the increased use of student volunteers, and new ways of reporting crime online.

The police minister is to announcea precursor tranche of Â£20m to accelerate the establishment of a PCC â€œinnovation fundâ€ to support collaboration with other forces, improve digital working and other innovative ways of delivering policing. The innovation fund will be worth up to Â£50m a year when it is fully established in 2014/15.

Green is also to announce separately that â€œsimpleâ€ police cautions are to be banned for repeat criminals who commit the same, or a similar, offence within two years. The new guidance to the police follows a Ministry of Justice review of the use of police cautions and the ban will apply to about 5,000 cautions issued out of the 165,000 handed out by officers each year. A ban on the repeat cautioning of offenders for serious offences is already in force.

The new ban will mean that an offender who receives a simple caution for a shoplifting offence should not get another simple caution for further theft-related offences within the next two years. The change only applies to adult offenders. Primary legislation will be introduced in the new year to implement the change.

The justice ministry said that a review of all â€œout-of-court disposalsâ€ was to be launched covering conditional cautions, fixed penalty notices, penalty notices for disorder, cannabis warnings and community resolutions.

In other findings of the YouGov poll, the numbers thinking that PCCs would fail to hold the police to account had risen from 26% to 28%; whilst the numbers claiming they had improved community relations had fallen to 9% from an expectation, in the summer of 2012 of 29%.

Only 19% claimed they could name their local PCC, and 56% said they never received any communication from their local police force.

There was marginally greater support for PCCs among Conservatives. About 13% of those intending to vote Conservative felt that PCCs had given them more say in policing â€“ slightly more than the electorate as a whole. Just 5% of Ukip voters felt the same way.

Darren Murphy, chief executive of Centreground Political Communications, the organisation that commissioned the poll, said: â€œThis shows the scale of the challenge facing elected PCCs. They may feel they are doing a worthwhile job, but there is little evidence that the voters feel the same way.

â€œInternational evidence shows that police forces that are thought to be democratically accountable get more public support and so are better able to fight crime. But if that is the motivation behind PCCs then the policy is in serious trouble.â€