A former Cleveland Police officer has been jailed for 19 years for a series of rapes and other offences. 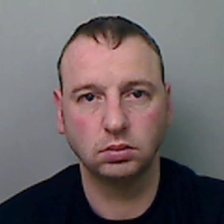 Wayne Scott was dismissed from the force in October 2012

Wayne Scott had denied rape and attempted rape offences involving one woman, but was found guilty after a trial last month. He admitted raping another woman on seven occasions and a sex offence involving a child.

Det Supt Peter McPhillips said Scott was a â€œsexual deviant and a predator who manipulated his victimsâ€.

Scott, 37, formerly from Stockton, was sentenced at Newcastle Crown Court earlier. He joined the Cleveland force in August 2002 but was arrested in August 2011 on suspicion of sexual assault and perverting the course of justice in relation to an incident while he was on duty.

Judge James Goss QC described Scott as manipulative, controlling and domineering. â€œYour offending has had an enormous impact on the wellbeing, confidence and lives of those against whom you offended, destroying their lives,â€ he said.

Scottâ€™s offences came to light after he was dismissed when a member of the public complained about him touching her sexually while on duty. Although he was not prosecuted for that offence, the publicity led other women to come forward.

Mr McPhillips said Scottâ€™s crimes had resulted in a â€œsignificant detrimental impactâ€ on his victims. â€œYet he has never exhibited any remorse and he does not appear to understand the horrific nature of his crimes,â€ he said.

Judge Goss said Scott would serve 15 years in custody and also passed a sexual offences prevention order and placed him on the sex offenders register. A statement from one of Scottâ€™s victims was read out in court describing how she was worried about his release as he had already tried to contact her since being in prison.

Officers said allegations had been made by a further eight victims that did not make it to court and they have appealed for any other victims to come forward.

In addition to the seven rapes, Scott admitted two common assaults, one sexual assault and two counts of inciting a child to engage in sexual touching.