A police officer who lied about witnessing the Plebgate row was jailed for 12 months today. 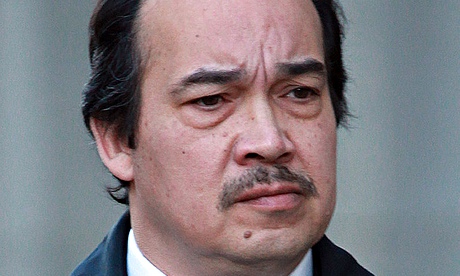 Keith Wallis, 53, (pictured), of West Drayton, west London, sent an email to Conservative deputy chief whip John Randall, who was his MP, wrongly claiming that he had seen what happened as Andrew Mitchell left Downing Street on September 19, 2012.

Last month, the officer from the Metropolitan Police diplomatic protection group pleaded guilty at the Old Bailey to misconduct in a public office.

The court heard he admitted his lie in a police interview and offered to resign.

In the interview he told police: â€œIt was a lie to say I was there. The truth is I was in Whitehall having a drink and when I overheard colleagues talking about it the next day I was incensed so I emailed my MP.

â€œI was incensed that [Mr Mitchell] was not arrested. I was eventually 100 per cent convinced I was there. I thought in a roundabout way I was backing up my colleagues but I wasnâ€™t â€¦ it all exploded up.

â€œFor sometime afterwards I convinced myself I was doing the right thing but I now know I wasnâ€™t. All I can say is that Iâ€™m really sorry, really sorry.â€

Mr Mitchell eventually resigned after it was claimed he had called police officers â€œplebsâ€ because they wouldnâ€™t let him take his bike out of the main gate at No. 10 on 19 September 2012.

Mr Mitchell has always denied using the term or saying â€œYou havenâ€™t heard the last of thisâ€ to officers as he cycled off.

His barrister Patrick Gibbs QC told the court: â€œMr Wallis would like you to send him to prison because he thinks that everyone would be better off without him.