Scottish independence: UK and Scots cabinets to meet in Scotland

The UK and Scottish cabinets are to hold separate meetings in the north-east of Scotland on Monday, ahead of the Scottish independence referendum. 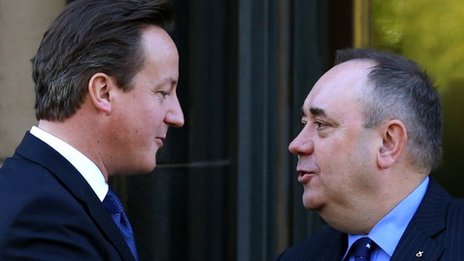 The meetings will be less than 10 miles apart, in Aberdeenshire.

It is only the second time in more than 90 years that the full UK cabinet has met in Scotland.

The North East is the centre of Scotlandâ€™s oil and gas industry. Both cabinets are expected to make announcements related to the sector.

Members of the Scottish cabinet will meet in the Aberdeenshire town of Portlethen, with their UK counterparts meeting about seven miles away in Aberdeen.

The meetings are expected to coincide with retired oil tycoon Sir Ian Wood publishing a major report into the future of the North Sea oil and gas industry.

Sir Ianâ€™s interim report, which was published in November, made a series of recommendations aimed at maximising the economic benefit from the UKâ€™s remaining offshore resources.

These included setting up a new regulator to oversee the industry.

Speaking ahead of the Scottish cabinet meeting, First Minister Alex Salmond announced the energy department of an independent Scotland would be co-headquartered in Aberdeen and Glasgow. Mr Salmond said the new department would have an estimated 300 staff.

The first minister described Aberdeen as Europeâ€™s â€œoil and gas capitalâ€, and therefore the â€œnatural homeâ€ for a new energy department, while Glasgow was â€œfast becoming the most influential low-carbon engineering centre in the UKâ€.

He added: â€œWith independence we would have new powers in areas such as energy regulation and the ability to target and apply financial incentives. With a new Scottish-based Energy Department and control over key economic levers, the potential to boost the energy industry and bring benefits to consumers and the wider economy would be enormous.â€

In a major speech a fortnight ago, the prime minister delivered a plea for Scotland to remain in the Union, pledging to â€œfight with all I have to keep us togetherâ€ ahead of the referendum on 18 September.

As he prepared to travel to Scotland for the meeting of his coalition cabinet, Mr Cameron said: â€œIn that speech I spoke about our long term economic plan to move from a country sinking under too much debt to one that is dynamic, innovative and creating thousands of jobs for people right across our country. The plan is working. Last year the economy grew by the fastest annual rate since the financial crisis, we have the highest number of UK businesses on record and we have cut taxes for 25 million people. This week I will take the cabinet to Scotland where we will set out how the UK government can maximise the benefit of North Sea oil and gas to the UK economy for decades into the future, giving a vital boost to local communities and families across Scotland.â€

Mr Cameron pledged to â€œcontinue to use the UKâ€™s broad shouldersâ€ to invest in the oil and gas industry in order to â€œattract businesses, create jobs, develop new skills in our young people and ensure we can compete in the global raceâ€.

The Scottish cabinet usually meets in Edinburgh, but regularly holds sessions in town and cities across Scotland, especially in the summer months.

Mr Cameronâ€™s predecessor as prime minister, Gordon Brown, held a meeting of the UK cabinet in Glasgow in 2009.

The UK cabinet had last met in Scotland in 1921 â€“ when Winston Churchill was the Colonial Secretary and a Liberal MP for Dundee.

The meeting was held in the council chamber at Inverness Town House because Prime Minister Lloyd George was on holiday in the Highlands.

On the agenda was the Irish emergency, unemployment and Armenian refugees.