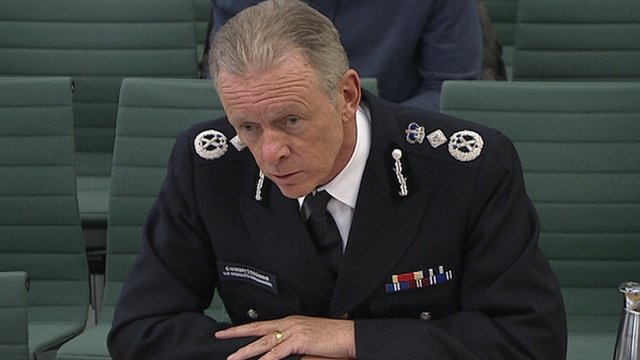 Sir Bernard Hogan-Howe was questioned about the shredding of documents

The head of the Metropolitan Police has â€œasked that there is no more shreddingâ€ of documents while he deals with claims files on corruption were destroyed.

Sir Bernard Hogan-Howe appeared before the Home Affairs Committee, which told him it would hold an inquiry into Met â€œstandards, governance and cultureâ€.

Destruction of files was raised by the Mark Ellison QC in his review of the Stephen Lawrence murder investigation.

Sir Bernard told MPs the Met was going through that report in detail. It found evidence of â€œmass shreddingâ€ of files relating to Operation Othona â€“ a top-secret anti-corruption initiative within the Met.

Mr Ellison also reported that an undercover Met officer had spied on the Lawrence family, and did not rule out that corruption may have compromised the investigation.

Sir Bernard told MPs he needed to find out whether the shredding was â€œinnocent or maliciousâ€, adding: â€œI just donâ€™t know.â€ He insisted the Met must find out what had happened, saying he needed to know: â€œWhat were the documents, what was on them, who asked for them to be shredded and why?â€

Sir Bernard was not Met Commissioner at the time of the Stephen Lawrence murder or the alleged shredding of internal documents â€“ which could have happened in 2001 or 2003 â€“ and he said he had no knowledge of the shredding.

He said there were â€œvery legitimate reasonsâ€ why documents were destroyed, but added: â€œI have asked that there is no more shredding until I get to the bottom of this.â€

He also said he had spoken to Mr Ellison after his review to ask if he felt the Met had been â€œdishonest, mischievous, maliciousâ€ in not providing information â€“ and he said he was told it was â€œchaos rather than maliceâ€.

During the meeting, committee chair Keith Vaz told Sir Bernard: â€œNormally I find you very reassuring to this committee. I am afraid I donâ€™t think we are reassured at the moment.â€

Asked if there should be an inquiry into â€œthe Met as a wholeâ€, Sir Bernard said: â€œNo. Thereâ€™s no need. Itâ€™s absolute nonsense. We are doing very well.â€ But Mr Vaz said there would be an inquiry â€œgiven all thatâ€™s happenedâ€.