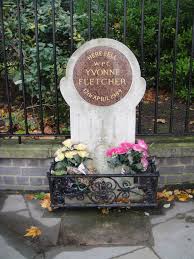 British agents have put relatives and associates of a suspect in the murder of police officer Yvonne Fletcher â€“ shot dead outside the Libyan Embassy in London in 1984 â€“ under 24-hour surveillance in Libya, according to a report.

MI6 officers have reportedly been talking to officials in Tripoli about the suspect, a former Libyan official, believed to be in his late 50s, following the downfall of Colonel Muammar Gaddafi. It is thought he may be hiding in Egypt.

A source close to the investigation told the Daily Mirror newspaper: â€œThis is a very significant development in the inquiry.

â€œThe MI6 officersâ€™ task is to liaise with local people to find the killers of Yvonne Fletcher. The Yard wants it settled and to announce the coup by the end of the year since it has gone on for so long.â€

The Foreign Office confirmed that British police had also been to Libya to talk about the case and said developments were expected.

â€œHelping the Metropolitan Police Service take forward their investigation into the murder of PC Fletcher is a priority. We continue to provide the police whatever support we can,â€ a spokesman said.

â€œWe are pleased the Metropolitan Police Service were able to return to Tripoli earlier this year to continue building cooperation on this case with the new Libyan authorities.

â€œThe Government knows the names of the people involved. I worry about them getting proof and that the proof will still be there.

â€œI have waited a long time. We shall see if they get it. I want justice.â€

A memorial ceremony will be held today for PC Fletcher to mark the 30th anniversary of her death.

â€œIt has been 30 years, but I still remember the day like it was yesterday,â€ her mother said.