Drunk driver rammed by Surrey Police on A3 is jailed 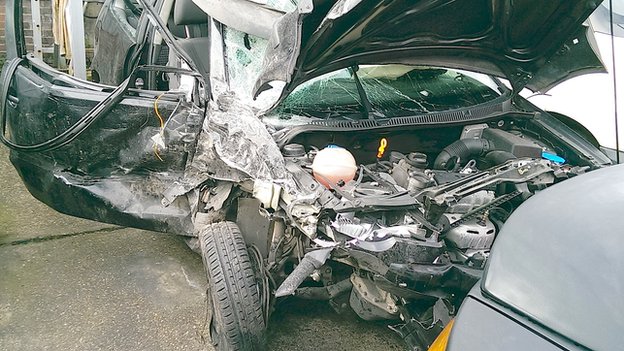 A drunk driver who drove her car on the wrong side of the A3 forcing a police car to ram into it has been sentenced to four months in prison.

Police in an unmarked black BMW X5 rammed into Perri Game, 21, from Chalgrove, Oxfordshire, to â€œprevent a serious traffic collisionâ€.

Game and two officers were taken to hospital with minor injuries on 29 January after the crash.

Game was also disqualified from driving for three years and ordered to pay a total of Â£630 costs.

Surrey Police said PC Simon Down and PC Ed Stock were on routine patrol when they were advised of a crash on the A3.

â€˜Prevented a catastropheâ€™
They began a rolling roadblock on the southbound carriageway to slow traffic.

It was then the officers saw Gameâ€™s Volkswagen Polo driving towards them at 60mph.

PC Down decided to deliberately manoeuvre to bring Gameâ€™s car to a halt. As a result of the impact, both vehicles were severely damaged and written off.

Acting Ch Insp Richard Mallett, head of roads policing unit, said: â€œThe video clearly shows the risks that our officers face in the course of carrying out their duties and demonstrates the bravery shown by Simon and Ed that morning.

â€œTheir decisive action almost certainly prevented a catastrophe happening and stopped any other motorist being seriously injured or even killed.â€