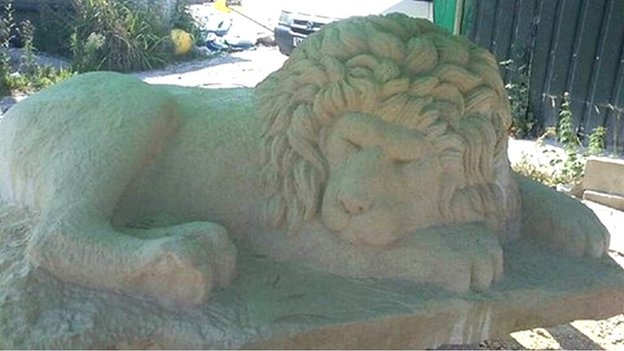 A stone sculpture of a sleeping lion has been created as a centrepiece for Surrey Policeâ€™s memorial garden.

The force commissioned the lion for a memorial garden being created at its Guildford headquarters, in honour of colleagues who died.

The project has been funded entirely by voluntary contributions.

Surrey Police said the garden was designed to provide a space for staff to remember colleagues who have contributed to policing in Surrey or to take a quiet moment of reflection.

The idea came from officers and staff who wanted a central place for a memorial.

Mr Kenrick, who describes his work as inspired by nature, said the lion was intended to represent peace and tranquillity.

He has not revealed how much the commission cost but said the stone was worth several thousand pounds alone.

The plaque by the sculpture reads: â€œIn memory of all those who have contributed to policing in Surrey.â€

Surrey Police said volunteers were still working on planting the garden, and its official opening would take place next spring.