Proposals include penalties for private security firm delays, longer court hours and more use of technology 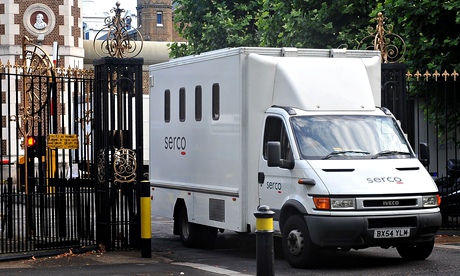 
Private security firms that delay delivering prisoners to court should be subject to stiff financial penalties, according to a judge-led review of the justice system.

Sir Brian Levesonâ€™s recommendations for improving efficiency of the countryâ€™s outdated criminal proceedings include proposals for extending the hours of magistratesâ€™ courts, expanding the use of video technology and providing more body cameras for police officers. Parliament, it is suggested, may also want to consider when defendants should have the right to opt for more expensive jury trials.

The report, commissioned by the lord chief justice, Lord Thomas of Cwmgiedd, will be a challenge for the Ministry of Justice given that it calls for transitional funds for transferring to new systems of working at a time of austerity.

Leveson, who chaired the inquiry into press standards, said the reviewâ€™s purpose was to streamline criminal cases â€œthereby reducing the cost of criminal proceedings for all public bodiesâ€.

It is also aimed at ensuring â€œproposed reductions in criminal legal aid can be justified on the basis that â€¦ less work will be required to be put into each case because considerable waste and inefficiency in the system â€¦ has been eliminatedâ€.

Renegotiating contracts for delivering prisoners to court is one of Levesonâ€™s most radical proposals. The prisoner escort custody service (Pecs) is costly and critical to the efficient functioning of the criminal courts, he noted.

It is supplied by two contractors â€“ Serco, which operates in London and the East of England, and GeoAmey, which covers the remainder of England and Wales. Pecs covers movements between prisons, police stations and courts. There are around 850,000 prisoner movements a year in England and Wales at an average cost of Â£161.

â€œThe present obligations on contractors to meet a 90% success rate, however, means that one in 10 prisoners may not be ready for court when they ought to be and yet the contractors will still be delivering to contract,â€ Leveson observed.

â€œThis has a huge knock-on effect on the business of the court in those cases, particularly where one or more prisoner concerned is significantly late. Furthermore, under the present contract for those travelling more than 45 miles, arrival at or after the time that the court is due to start is not a breach of the delivery time â€¦The cost of lost time to the court system appears to be ignored.

â€œI would urge those responsible to reconsider the terms of any future contract with prisoner movement providers. They must demand greater efficiency and properly manage performance of the contract.â€

Remand inmates should be held closer to the courts where they are due to appear, Leveson said.

More flexible opening hours for magistrates courts should be examined to accommodate those who cannot attend normal daytime hearings, Levesonâ€™s review suggests: â€œThis must be one of the few public services which [has] failed to acknowledge the different ways that members of the public now live their lives.â€

Enthusiasm for early morning, evening and weekend opening surfaced after the 2011 riots but has fallen into abeyance. â€œThis possibility needs to be considered afresh,â€ Leveson declared. â€œWe ought to establish the extent to which victims and witnesses will benefit from a more flexible approach to the hours that our courts sit.â€

The review also supports greater use of video and conferencing technology to enable suspects to appear from prisons and police stations remotely, as well as video cameras mounted on police officersâ€™ bodies or helmets.

In terms of jury trials, the review points out: â€œJurors, required to give up their time to undertake that important civic duty not infrequently at considerable personal cost â€¦ are equally not infrequently concerned that their time is â€˜wastedâ€™ by what are perceived to be trivial cases.â€

The MoJ has already arranged for investment in new courtroom technology but Leveson advised that more transitional funding should be given to HM Courts and Tribunal Service â€œto provide additional sitting days and available judges to dispose of the legacy work while at the same time processing new cases earlier and with greater efficacy and efficiencyâ€.

Leveson said: â€œThe changes I have recommended are all designed to streamline the way the investigation and prosecution of crime is approached without ever losing sight of the interests of justice.

â€œOur conduct of criminal trials was designed in the 19th century with many changes and reforms bolted on, especially over the last 30 years. The result is that it has become inefficient, time consuming and, as a result, very expensive.â€