Andy Coulson investigated for perjury while working at No 10 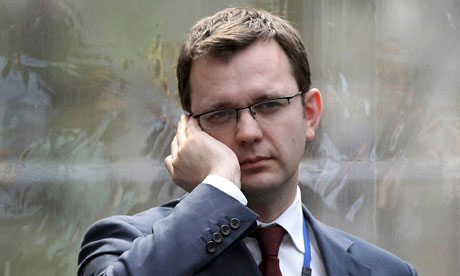 Andy Coulson, the prime minister’s former director of communications, is being investigated by police for allegedly committing perjury while working for David Cameron in Downing Street.

The development renews pressure on the prime minister over his judgment in hiring the former News of the World editor and represents the third criminal investigation Coulson faces, adding to allegations that he knew of phone hacking while in charge of the tabloid and authorised bribes to police officers.

Strathclyde detectives confirmed that they had opened a perjury inquiry centred on evidence Coulson gave in court last year that led to a man being jailed.

Coulson was a major witness in a trial involving Tommy Sheridan, the former MSP who was accused of lying in court when winning a libel action against the News of the World. Coulson had been the editor of the Sunday tabloid when it ran a story accusing Sheridan of being an adulterer who visited swingers’ clubs.

Sources say police will examine Coulson’s denial of any knowledge of phone hacking and payments to police officers at the Sheridan trial against the evidence held by the Scotland Yard investigation.

At the trial Coulson also denied knowing that the paper paid corrupt police officers for tip-offs, which contradicts recent disclosures that News International has uncovered emails showing payments were made to the police during his editorship.

Coulson, who was called as a witness in December 2010, told the court that he had no knowledge of illegal activities by reporters while he was editor of the newspaper.

He also claimed: “I don’t accept there was a culture of phone hacking at the News of the World.”

Sheridan was jailed for three years in January after being found guilty of perjury during his 2006 defamation action against the NoW. He had successfully sued the newspaper over its claims.

Bird denied being part of a “culture of phone tapping” and Wight, who is now the paper’s books editor, told the court he was not aware of any payment for illegal activities.

Strathclyde police’s assistant chief constable, George Hamilton, said: “Following our discussions with the crown, we have now been instructed to carry out a full investigation into allegations that witnesses gave perjured evidence in the trial of Tommy Sheridan and into alleged breaches of data protection and phone hacking.

“We will also be looking to see if we can uncover any evidence of corruption in the police service or any other organisation related to these inquiries.

“However, I must stress that no specific allegations regarding corruption have been presented to us at this time.

“We will be working with the Metropolitan police and with the other Scottish forces as we progress with the investigation.

“I have put in place a structure that will allow us to work effectively together, but also to ensure that any member of the public who has a concern regarding the safety and security of their private data and information is able to register that concern and to have it properly investigated.

“By its very nature, this investigation will require us to allocate varying levels of resources to it. There is a huge amount of material to consider and, potentially, a large number of people to contact.

“This will mean that the investigation is likely to be a lengthy one. However, you have my absolute assurance that it will be a thorough one. We will do everything we can to find out the facts and to report all examples of wrongdoing.”

Sheridan’s lawyer, Aamer Anwar, said: “Over two weeks ago we provided a detailed dossier of allegations of perjury, phone hacking and breach of data to Strathclyde police and called for a robust investigation.

“Over Â£2m was spent by the police on investigating Mr and Mrs Sheridan and we were told it was in the public interest. I expect now to see a similar ruthlessness and determination in dealing with the News of the World.”

A News International spokeswoman said: “We can confirm that we have been contacted by police on this matter. We can’t say anything else.”

Earlier this month it emerged that Coulson had hired one of Scotland’s top QCs, Paul McBride.