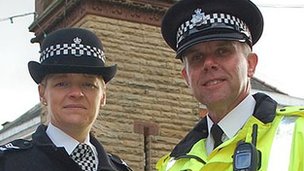 Two police officers who carried out their first foot patrol together 30 years ago have made a final tour of duty together before they retire.

Sgt Alison Lee and Insp Dave Lea joined Lancashire Constabulary in 1981 and 1982 as beat officers and first went out on patrol together in Ormskirk.

He has also been an armed response officer.

He said: “Many things have changed. We used to go out on patrol in just our tunics with a baton, now officers wear body armour and are much better equipped.

“I wanted to finish on a high. I’ve had a great career – I’ve loved almost every minute of it.”

Sgt Lee added: “Things were quite different from when we started – it was certainly a bit more Life on Mars. I don’t think I drove a police car for my first three and a half years, everything was done on foot.

“I moved away from Ormskirk to join the mounted branch but I would come back on patrol with the horses and for things like the laying of the wreaths on the cenotaph.

“It’s always nice to come back to Ormskirk, which is why we wanted to finish our final shifts here.”