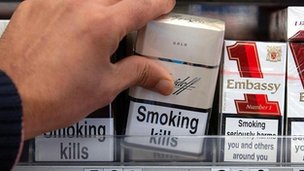 Â The government is reminding supermarket retailers in England to remove tobacco displays within the next 100 days.

The Department of Health said the ban, which will come into force on 6 April, would protect young people who were often the target of tobacco promotion.

Smaller shops do not have to change their displays until 2015.

Anti-smoking campaigners say the ban is an important step. Scotland, Wales and Northern Ireland are also moving towards similar bans.

From 6 April 2012, customers in England will still be able to buy cigarettes in the normal way, but the ban – which was announced in 2008 – will mean cigarettes will have to be kept under the counter.

“It will also help and support adults who are trying to quit.”

Anti-smoking campaigners have argued that displaying cigarettes near to things like chocolate and crisps makes smoking seem like an everyday part of life.

“Retailers have nothing to fearâ€

“It’s vital that everything is done to put tobacco out of sight and out of mind to protect future generations of children,” said Jean King of Cancer Research UK.

“Half of all long-term smokers will die from a tobacco-related disease, and most become addicted as teenagers.”

“Retailers have nothing to fear,” said Deborah Arnott, chief executive of Ash (Action on Smoking and Health). “The evidence from Ireland, when the legislation was implemented there, was that committed smokers still knew where to buy cigarettes and didn’t need to see the displays to decide what they wanted to buy.”

Scotland is due to introduce a similar ban in 2012.

The Welsh government said it remained committed to introducing regulations to ban the display of tobacco products at the point of sale, but legal challenges have delayed the process.