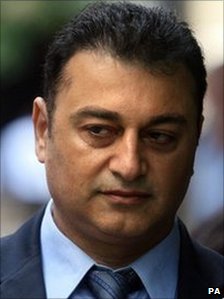 A former Metropolitan Police commander abused his powers for his own benefit, a court has been told.

Ali Dizaei “bullied and intimidated” a man after a row outside a restaurant in 2008, Southwark Crown Court heard.

The prosecution said his actions amounted to the “wholesale abuse” of police powers for his own “personal and oblique motives”.

Mr Dizaei, 49, denies charges of misconduct in a public office and perverting the course of justice.

Prosecutor Stephen Wright QC told the jury the former officer “threatened” Iraqi Waad Al-Baghdadi in a row over payment for a personal website.

He then wove a web of lies in the aftermath of the row outside the Persian Yas restaurant in west London, the court heard

Mr Wright said actions like Mr Dizaei’s had a “corrosive” impact “between citizen and police generally”.

The prosecutor said: “He was, in fact, pursuing a citizen for his own personal motive.”

Jurors have already been told that Mr Dizaei, from Acton, west London, is being retried for the charges.