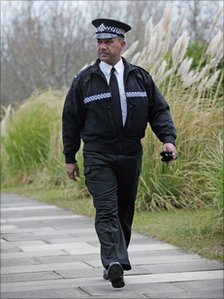 A former Cleveland Police officer who was wrongfully sent to prison has been awarded almost Â£400,000 after an 18-year legal fight.

Former traffic officer Sultan Alam, 48, was jailed for 18 months in 1996 for conspiracy to steal car parts, but was cleared by the Court of Appeal in 2007.

Judge Andrew Keyser QC said the force had tried to “destroy” his reputation.

Cleveland Police said it was “pleased” with the outcome.

As well as damages, Mr Alam will also receive compensation for loss of earnings which have yet to be calculated.

After being wrongfully jailed, Mr Alam was reinstated to Cleveland Police, but retired in 2009 on health grounds.

The court heard how the officer, who served half of his prison sentence, was “stitched up” by fellow officers as a result of industrial tribunal proceedings he launched in 1993, complaining of racial discrimination.

In 2003, four fellow officers involved in Mr Alam’s original prosecution were charged with conspiracy to pervert the course of justice and other offences, but were acquitted.

In his judgement published on Wednesday, Judge Keyser said: “The claimant knew that he was not the unfortunate victim of an accidental miscarriage of justice but that he was the deliberate target of a conspiracy to pervert the course of justice, the aim of which was to destroy his reputation and his career.

“That is not an incidental feature of this case but is at the heart of the harm suffered by the claimant.

“The award of aggravated damages reflects the fact that that downfall was deliberately brought about by the concerted action of police officers.”

A Cleveland Police spokesperson said: “The events under investigation occurred many years ago and their impropriety was recognised by current senior management by the early admission of liability made on behalf of the present chief constable at the outset of this case.

“The award of compensation to Mr Alam now draws a line under this unfortunate matter. We wish Mr Alam well for the future.”

Earlier this month after hearing he would receive damages, Mr Alam said: “I’m relieved it’s over.”