A community support officer who raped a 12-year-old schoolgirl was today jailed for ten years.

Michael Yardley, 35, had a seven-month affair with the childÂ before his shocked wife Stephanie caught them kissing and cuddling on the sofa in the living room of the marital home.

The CSO, employed byÂ Lincolnshire Police, was caught out after getting up early to tell his wife he was going for a run, according to Andrew Scott, prosecuting. 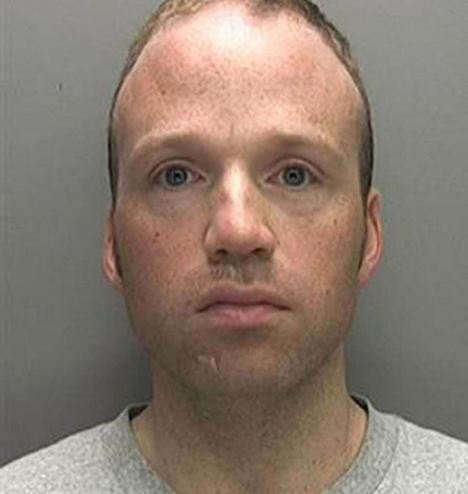 Jailed for raping a schoolgirl: SCO Michael Yardley, 35, had a seven-month affair with the 12-year-old

The couple separated and Yardley’s wife later raised her suspicions with his employers, sparking an investigation.

Both Yardley and the girl, who was by then 13, admitted having sex with each other on several occasions both at Yardley’s home and in his car.

The girl, who cannot be named for legal reasons, told police they had agreed between them that they would set up home together when she reached 18.

Mr Scott said: ‘He befriended this girl and took advantage of her. Her parents trusted him and did not consider for one moment that anything untoward was happening.’

Yardley had previously laughed off suggestions that the girl had a crush on him and even managed to convince her father that nothing was wrong, despite the fact that he discovered she had sent 200 text messages to him.

Yardley, of Morton, Lincolnshire, admitted raping the girl on October 27, 2010 when she was 12 and four charges of sexual activity with a young girl between November 2010 and April this year.

He was jailed for ten years and placed on the sex offenders’ register for life.

Yardley quit his role as a CSO after the offences came to light.

Recorder John Philpotts told him: ‘These offences are extremely grave because of her age and the difference in age between you.

‘Her parents thought their child was safe in your care. They were mistaken.

‘You used the fact that her parents trusted you to take care of her. You used that to abuse her in the most disgraceful fashion.

‘Your behaviour was persistent and it was prolonged. This has devastated the victim’s family. The long-term emotional and psychological effects on the victim can only be guessed. I have no doubt they will be serious and considerable.’

Alison Summers, defending, said Yardley developed a friendship with the girl after becoming unhappy in his marriage.

She said: ‘He realised he shouldn’t have married. He felt his life was out of control. It was against that background of personal crisis that it would appear that his judgement was lost.

‘I can only relate his remorse and his shame.’

He said: ‘Yardley has taken advantage and abused the trust of friends and a young girl. As a consequence of his conduct,the childhood and adolescence of this young girl has been stolen.’